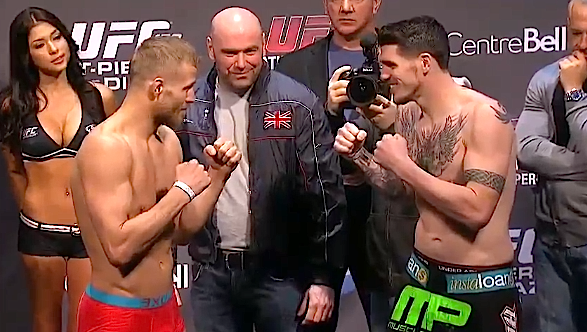 After a slow start, Chris Camozzi finally found his range and finished strong, wearing down Nick Ring en route to a split decision victory. The victory extends Camozzi’s win streak to four inside the octagon.

Nick Ring flashed his jab early and landed a flurry of leg kicks to the lead leg of Chris Camozzi to start. Camozzi fired back with his jab as the round wore on and connected with a powerful overhand left, but failed to put together any significant combinations. Ring used good footwork and angles to land at will with his right hand to finish off the round.

Both fighters started the second with kicks, and Ring continued to land and then step out of range as Camozzi threw with power. Ring went right back to his jab, then connected with back-to-back straight left hands. Camozzi kept pressuring and it paid off as he connected with a left hand and then a flying knee. Ring shook it off and went right back to work to close out another solid round.

Camozzi came forward to start the final round, but again it was Ring that scored with stiff leg kicks. Camozzi finally listened to his corner, putting together a three-punch combination before clinching and putting Ring on the cage. After disengaging, Camozzi got busy with his jab and continued to follow up with his left hand as Ring visibly started to slow. Camozzi took advantage of a fading Ring, but could not finish before the bell sounded on the bout.