Opinion: Georges St-Pierre will have no issues fighting with emotion against Nick Diaz at UFC 158 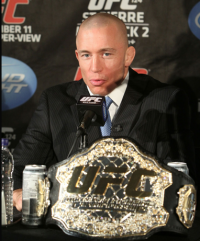 UFC welterweight champion Georges St-Pierre will look to defend his title against Nick Diaz at UFC 158 on Saturday night in his home country of Canada. The fight is being billed as ‘personal’ because of the long back and forth verbal jabs both fighters have hurled towards one another.

They were supposed to fight in 2011, but the bout never came to fruition because Diaz missed pre-fight press conferences and was pulled from the bout. St-Pierre then injured his ACL and spent a year rehabbing the injury before returning in November 2012 to defeat the interim champion Carlos Condit. The same Condit that narrowly edged Diaz to win the interim title in February 2012.

That’s not to say that those verbal attacks will negatively affect the way GSP fights on Saturday night.

There seems to be some genuine push by the media and others to make this “personal” promotion of the fight more than what it really is. Does GSP want to smash Nick Diaz?

Absolutely, just like any other fighter out there he wants to smash his opponent.

GSP has been here before, we were witnesses at UFC 94 when he fought BJ Penn who verbally attacked GSP beforehand, and had given him a hell of a fight a couple of years earlier at UFC 58. Did GSP fight on emotion, allowing that emotion to significantly alter his game plan designed to beat the brakes off Penn?

No. We saw a one sided beatdown where GSP landed 310 total strikes compared to 63 for Penn while also landing four out of seven takedowns according to Fightmetric.

Absolutely, but that would basically involve a puncher’s chance or GSP totally abandoning what has made him the most well rounded fighter in MMA today.

You’ll probably tune in to see a repeat of GSP’s performance at UFC 94 against Penn. GSP is the best in the game at implementing gameplans and sticking to them to ensure victory. If anything, expect the anger/emotion/aggressiveness that Diaz fights with to allow GSP to implement his gameplan more effectively.

Be sure to check out my preview that will be published tomorrow as I tell you why that will more than likely be the outcome on Saturday night.