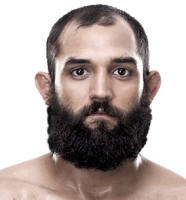 [ads2]
MMA Tonight returned Wednesday evening on the 102.5 FM The Game radio airwaves in Nashville. This week’s guest was UFC 158 co-headliner and top welterweight contender Johny Hendricks, who came on to discuss his bout with Carlos Condit which takes place Saturday LIVE on Pay-Per-View.

If you’re familiar with MMA Tonight host Darren McFarland, you know he’s not a huge fan of the Diaz brothers. He asked Hendricks, if like himself, he thinks Georges St-Pierre is going to have his way with Nick Diaz on Saturday. “I do believe that,” Hendricks said. “We know Nick Diaz, his weakest point is wrestling and we know GSP, he’s going to be able to take him down.” Short and sweet. Is it really going to be that simple? Guess we’ll find out.

Hendricks also discussed fighting in Montreal, the IOC’s decision to drop wrestling from the Olympics, his wrestling background and how he made the transition to a powerful puncher. Hendricks also talked about how he prepared for Condit’s fighting style, what he thinks will be the determining factor in the fight and how he thinks Condit has changed since his loss to Martin Kampmann in 2009.

In addition to talking with Hendricks the guys also discussed Ronda Rousey‘s recent win and rise to prominence and a recent article by CBS Sports columnist Greg Doyel that stated the UFC’s growth in the U.S. has peaked.