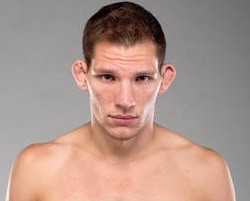 This weekend the UFC will visit Berlin, Germany, to host their UFC Fight Night 41 event. The card has quite a few interesting fights on it, but one that particularly sparks my interest is the middleweight showdown between undefeated prospects Luke Barnatt (8-0) and Sean Strickland (14-0). Both guys are young, talented, up and coming … Read more 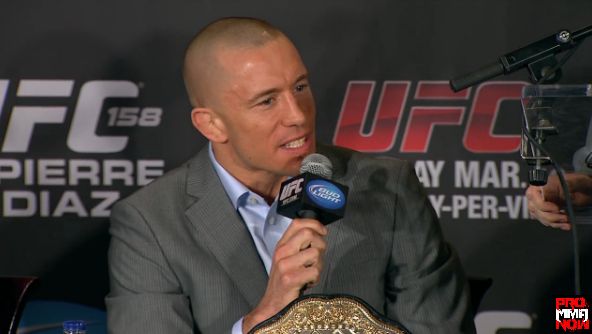 UFC welterweight champion Georges St-Pierre will look to defend his title against Nick Diaz at UFC 158 on Saturday night in his home country of Canada. The fight is being billed as ‘personal’ because of the long back and forth verbal jabs both fighters have hurled towards one another.

Joe Stevenson fought Diego Sanchez tonight in London, England at UFC 95. Diego looked really good in his striking with knees, low and high kicks, and great boxing. He also showed some good scrambles the few times the fight went to the ground. The difference in the fight was Diego’s diversity of striking compared to Stevenson’s absolute predictability.

Joe Stevenson was in a boxing match. I think he threw one kick the whole fight. He did attempt a couple of take downs but once they were stuffed he went right back to the boxing match. I’ve talked with some fighters who don’t realize they are losing because they are having so much fun. In all fairness, maybe this was the case with Joe. But then, that is where your corner-men come in between rounds, to help you make those adjustments.

I’ll admit it. Since I don’t really like shelling out the almost 50 bucks it takes to buy a UFC pay per view, I usually head over to the local Hooters to check out the fights. Naturally everyone suspects that I have ulterior motives, especially my girlfriend who isn’t too fond of the girls in the orange shorts and push up bras.

Even though it is free it is always pretty hectic, so I miss out on most of Joe Rogan’s shockingly one-sided commentary. However, there are perks to watching the show along side the meat of the UFC’s fan base. During the Mauricio Shogun Rua versus Mark Coleman fight, the fans were continually voicing their displeasure with the Brazilian’s performance.

What an interesting card this was. Some crazy fights we had. Fighters were gassed they were. The UFC should refund people a portion of their Pay Per View bill they should.

I was really interested to see what Mark Coleman was going to look like and my worst fears were confirmed. It was as if we had gone back in a time capsule to UFC 1 for that fight.  On one hand the fight was intriguing to watch, but not because it was two of the top MMA fighters in the world testing their skill, but because I was hoping that not only would the completely exasperated Coleman not drop dead in front of my eyes, but for a few moments it even looked like he may win.

This week has practically been a UFC media blitz. With UFC 93 going down today in Dublin and the premiere of UFC Primetime, which is promoting UFC 94, it is hard to even think about anything else in the MMA world.

Perhaps the folks over at ZUFFA have gone ahead and made the mistake of not thinking of anything else. The number one promotion in the MMA business closed out 2008 in style with one of their most stacked cards of the year, UFC 92. However, now they seem to be in danger of producing two less than stellar cards.

Some MMA pundits have complained about the quality of UFC 93, which is headlined by a too late match up between Rich Franklin and Dan Henderson and a rematch between Pride GP champions Mark Coleman and Shogun Rua. In a lot of ways this card does not live up to the UFC’s recent level, but it is still far and away better than what is currently scheduled to come next.

Fox News presents FIGHT GAME: Mike Straka and the guys go three rounds this week discussing the match ups at UFC 92, they also take a look at WAMMA’s role in MMA and finally, we’re treated to an MMA fashion show.

FIGHT GAME, Round 1: Panel’s most anticipated fights for UFC 92

I always enjoy the WEC events.  They run a tight ship over there with no frills; just good solid MMA action from some of the top talent in the world.

However, last night was strange.  Why in the world they chose not to air the Rob McCullough vs. Donald Cerrone fight had me flabbergasted.   Even on the edited replay of the event they didn’t air it.

Of course it turned out to be the fight of the night.

Paulo Filho should be stripped of his belt.  His division, middleweight, has been folded into the UFC anyway but just to make a statement they should have stripped him for not making weight.