Leandro Silva out, Mike Rhodes in against Brandon Thatch in RFA 7 headliner 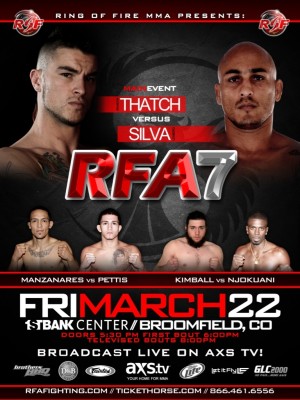 [ads2]
Following Leandro “Batata” Silva being forced to withdraw from his RFA 7 main event bout due to a leg infection, Duke Roufus-trained Milwaukee fighter Mike “Biggie” Rhodes (4-0) will step in to face Denver’s Brandon “Rukus” Thatch (8-1) in a welterweight showdown.

RFA officials made the announcement Wednesday.

“Brandon Thatch is the hometown hero, while Rhodes and Silva are both relatively unknown in the area,” said RFA president Ed Soares regarding the new RFA 7 main event. “However, you know what kind of fighters you get from Duke Roufus. It’s unfortunate what happened to Silva, but at the end of the day styles make fights and Thatch vs. Rhodes will be a very exciting and explosive main event at RFA 7.”

In preparation for RFA 7, Thatch has been training with UFC welterweight champion Georges St-Pierre at the famed Tri-Star Gym in Montreal. He was hand-picked as a training partner to help St-Pierre prepare for his successful title defense against Carlos Condit last Fall.

Thatch remained with the team and continued to help St-Pierre prepare for his upcoming bout with Nick Diaz as well. Thatch traveled back home to Denver last week and finished up his training camp at Grudge Training Center.

“I’m here to fight anyone the RFA puts in front of me. This is what we do and what we’re here for,” Thatch said. “I don’t know much about Rhodes yet, but I hear he’s a tough guy and I know he’s from a great camp. I’m ready for war at RFA 7.”

Rhodes trains alongside the UFC’s No. 1 featherweight (and lightweight) contender Anthony Pettis at the Roufusport MMA Academy in Wisconsin. He was already deep in training camp for another event later this month, so was happy for the chance to fill in at RFA 7 and to fight on AXStv.

“When Duke called and told me about the opportunity to fight for the RFA and the opponent being Thatch, I was very excited,” Rhodes said. “He’s a great fighter and very talented everywhere. This is the test I’ve been looking for. I believe I belong in the cage with the best and a win over Brandon will prove that. He is definitely the biggest test and this is the biggest fight of my young career.”

One thought on “Leandro Silva out, Mike Rhodes in against Brandon Thatch in RFA 7 headliner”