Straus out, Pat Curran will meet Shahbulat Shamhalaev at Bellator 95 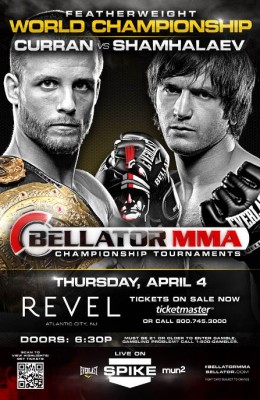 Bellator featherweight Daniel Straus had to withdraw from his upcoming Bellator 95 battle with Pat Curran due to a broken hand. Curran will now face off against Shahbulat Shamhalaev on April 4th inside Atlantic City’s Revel Casino live on Spike.

Tickets are on sale now and can be purchased at all Ticketmaster locations, online at Ticketmaster.com and by calling 800-745-3000. The Main Card will broadcast LIVE starting at 10 p.m. EST on Spike, as well as in Spanish language on mun2. The preliminary card will be streamed LIVE and FREE on Spike.com, with doors to event opening at 6:30pm EST.

“When Daniel went down with his injury, I reached out to Shahbulat and his manager to see if he was ready for this fight, and without hesitation his answer was yes,” Bellator Chairman & CEO Bjorn Rebney said. “After watching Shahbulat’s run through our last tournament, I couldn’t think of a better fight to end our season than Curran-Shahbulat on April 4th.”

Shamhalaev has knocked out his last three opponents and earned the $100K Tournament prize. Shamhalaev spoke on the opportunity to fight for the Bellator title.

“All the work I’ve put in has been for this moment, and I couldn’t be happier to give all the Atlantic City fans a show on April 4th,” Shahbulat said. “Pat Curran is a really tough competitor, but I know what I have to do to get the belt and become Bellator’s new Featherweight Champion.”

Curran (18-4) has won five consecutive fights since moving to the featherweight division. Curran is looking forward to the challenge Shamhalaev presents and can’t wait to get back in action.

“He’s a great counter striker, as am I, and I see a lot of openings with Shabulat,” Curran said. “Shabulat brings one punch knockout power, and with my style, it’s going to be a swing for fences fight. This is my second fight this season, and I couldn’t ask for more. I love staying active, and Bellator has provided that for me.”

Also on the the card will be a welterweight battle between former Bellator champion Lyman Good and MMA veteran Dante Rivera.

Jessica “Evil” Eye will return to action after her win over Zoila Gurgel when she takes on Munah Holland in a women’s flyweight bout.

The full card for Bellator MMA from Revel on April 4th is below: