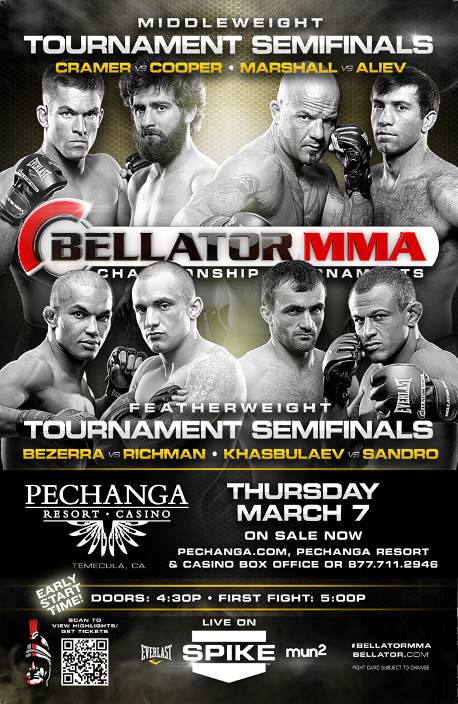 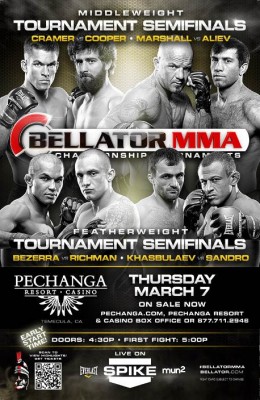 The Bellator 92 event will bring a stacked night of fights to Temecula’s  Pechanga Resort and Casino on March 7th live on Spike TV. The night will showcase the Featherweight and Middleweight Tournament Semifinals.

Tickets for the event start at just $40, and can be purchased by visiting Pechanga.com, Bellator.com, or by calling the Pechanga Box Office at 877-711-2946 or visiting between noon and 8pm daily. The event has an early start time as the first fight enters the cage at 5:00 p.m. with the LIVE worldwide television broadcast starting at 7 p.m. PST on Spike TV, as well as in Spanish language on mun2. The preliminary card will be streamed LIVE and FREE on Spike.com starting at 5 p.m. MST.

“Our sold out premiere event in Southern California last month showed that this market is a great one for Bellator LIVE on Spike,” said Bellator Chairman & CEO Bjorn Rebney.  “To bring our second California event to the crown jewel of Southern California casinos, Pechanga is absolutely icing on the cake and to have such a loaded card just makes this that much better.”

Doug “The Rhino” Marshall will kick things off in the Bellator Middleweight Tournament against Sultan Aliev. Marshall is fresh off his one punch KO over Andreas Spang on Feb. 14 and looks to make it three consecutive victories via KO:

“Winning the tournament will validate me – again – and put me where I need to be, back at the top of the food chain, with a target on my back,” Marshall said. “Ain’t no more hunting – the game’s going to come to me. It’s going to be huge.”

Also, Dan Cramer will return to action after his instant classic victory over Brian Rogers in the quarterfinals. He’ll be taking on Brett “Fudoshin” Cooper who has won 11 fights via TKO/KO. A featherweight bout between  Mike “The Marine” Richman and Alexandre “PoPo” Bezerra will also take place on the card.

Highly regarded featherweight Marlon Sandro will return to action to take on Russian submission artist Magomedrasul “Frodo” Khasbulaev. Sandro took a majority decision win in his last outing in a very close fight and spoke on the opportunity to continue in the tournament:

“I am so fortunate to have the chance to fight in the toughest tournament in the world,” Sandro said. “This is my opportunity to show the world what I can do and I am ready to finish at the top.”

The full card for Bellator’s March 7th event from Southern California’s Pechanga Resort & Casino can be found below: