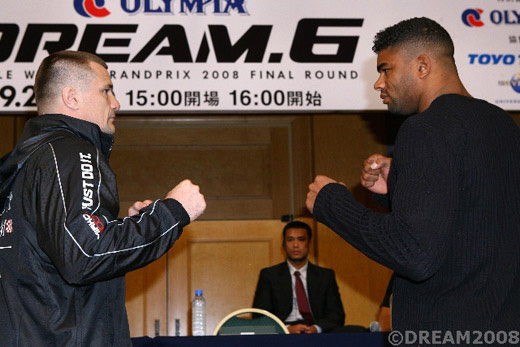 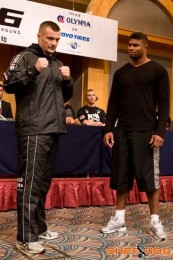 Mirko Cro Cop might still be angry about the two knees he took to the groin from Alistair Overeem back at DREAM 6 in September 2008 in Japan that halted the bout early via No Contest.

Or he might just be giving his unbiased opinion on what happens to a fighter who gets popped for elevated testosterone levels high enough to power a thoroughbred race horse, who then is forced to sit on the sidelines and return to the Octagon a year later without pharmaceutical crutches.

Keep in mind, Overeem never copped to doing steroids. He blamed the elevated testosterone levels on an anti-inflammatory medicine his doctor prescribed. But here’s what Cro Cop had to say about The Reem getting brutally knocked out by Antonio “Bigfoot” Silva at UFC 156 this past weekend:

“I wasn’t surprised by Silva’s victory at all and I had believed he would win. I don’t want to come off as a smart-ass or say I knew it all along, so I’ll explain why I’d believed so. First, Silva is a big tough guy with a huge heart who had demolished Fedor and he needs no better reference than that, and Alistair hugely underestimated him and belittled him with his arrogant statements, so this mobilized Silva in the best possible way. Second, Silva is a natural heavyweight, and Alistair – for the first time since way back in 2007, when he began to gain huge weight – fought without the drugs he had used constantly for years, including testosterone and all the other shit that goes with it.”

“Watching the weigh-in, I saw that his muscles mass was nowhere near his usual, he had the weight, but he wasn’t nearly as carved out and defined, since he couldn’t take anything because he was watched by the Athletic Commission. This also reflects on the psyche of a man who’s been using stuff to increase his strength, endurance, pain tolerance and aggressiveness for years, and now there was none of that. Alistair is an excellent fighter, but he still owes that excellence to something that’s dirty and unpermitted, and, in the end, very dangerous to health.”

“I don’t think he was concerned by that, he wanted success at any cost. And the third thing is, Alistair had behaved so arrogantly that someone needed to put him back in his place. His belittling of Silva was repulsive, saying that after beating up Silva he’d go for the belt, and at the weigh-in and entering the arena he acted like he invented the fighting sport, and he’s been behaving with so much arrogance lately that I’m glad Silva put him back in his place and taught him a lesson! Congratulations Silva, from the heart!”

What did you think about Overeem’s physique at UFC 156? Did you think he looked softer? I will say that thought went through my head when I saw him at the weigh-ins. I also thought he highly underestimated Bigfoot and took him way too lightly.

Overeem hasn’t said much since the loss. He wasn’t at the post-fight press conference, but he did say he will be back in this Tweet on Sunday: