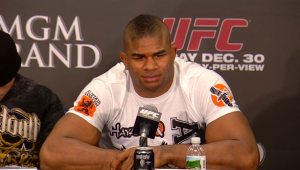 Former Strikeforce heavyweight champion Alistair Overeem has tested positive for elevated levels of testosterone following a surprise drug test that was administered to he and five other UFC heavyweight fighters last Tuesday, March 27, prior to a UFC 146 press conference in Las Vegas.

ProMMAnow.com (www.prommanow.com) was notified today via email from Keith Kizer, the Nevada State Athletic Commission’s Executive Director, that Overeem tested positive for an increased Testosterone to Epitestosterone (T/E) ratio greater than 10-to-1.

Overeem was scheduled to face UFC heavyweight champion Junior dos Santos for the title in the UFC 146 headliner May 26 at the MGM Grand Garden Arena in Las Vegas.

Overeem is not yet licensed in Nevada so he can not be suspended by the NSAC, but he also cannot fight at UFC 146 unless he appears before the Commission and somehow proves he has super-naturally elevated testosterone levels — or he can request that his “B” urine sample be tested, which was taken on the same day as the “A” sample that tested positive, and hope that it tests negative.

Other heavyweights fighting at UFC 146 who were also tested include Junior dos Santos, Frank Mir, Cain Velasquez, Roy Nelson and Antonio Silva. They all tested negative.

For further reading: The World Anti-Doping Agency’s Guidelines for Reporting and Management of Elevated T/E Ratios.