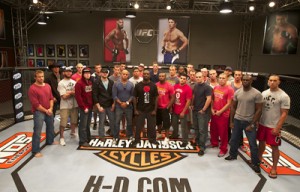 Season 17 of the reality TV series made its special two-hour premiere Tuesday night on FX from 8 – 10 p.m. ET/PT.

Since The Ultimate Fighter moved from Spike TV to FX in March 2012, beginning with season 15, Tuesday’s TUF 17 premiere broke viewing records for the series in the following key demographics:

In addition to the ratings success of the TUF 17 opener, this past Saturday night’s UFC on FX 7 broadcast, highlighted by Vitor Belfort‘s amazing head kick knockout of Michael Bisping in the main event, was the most-watched UFC event in FX history, setting highs in:

UFC on FX 7, along with Iron Man 2, which also aired January 19 on FX, made it the #1 most-watched network in all of television Saturday night for Adults 18-49 and all male demos.

If you missed the TUF 17 premiere, you can read our thoughts on the new look and find out which fighters made it through the elimination round here: The Ultimate Fighter 17 episode 1 recap and review. We also have last Saturday’s full UFC on FX 7 results and play-by-play commentary.

*Numbers based on Fast Nationals, subject to change.