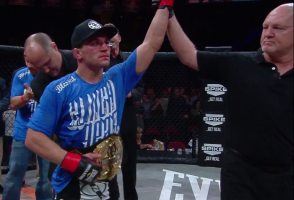 Bellator MMA lightweight champion Michael Chandler took out Rick Hawn with relative ease for his first title defense. Chandler used good movement while trading some strikes with Hawn before shooting in for the takedown and getting it in the first round.

He landed some head and body shots while Hawn was content to lock up his guard while landing occasional elbows from the bottom. Hawn was able to get back to his feet, but not without taking some heavy shots to the back of his legs.

The second round saw Chandler get in deep on a takedown attempt and lift Hawn into the air before slamming him to the canvas. Hawn again attacked with elbows from the bottom with a closed guard, but made a fatal mistake when trying to get back up to his feet.

He allowed Chandler to take his back with his hooks in, and basically gave Chandler the rear naked choke. Chandler forced Hawn to fall backwards as he sunk the choke in but it was took late as Hawn was tapping as soon as they both hit the mat.

There are two questions after watching this fight. Did Hawn just simple not show up for this fight? Or you have to ask yourself is Chandler just that good?

Let us know in the comments section.