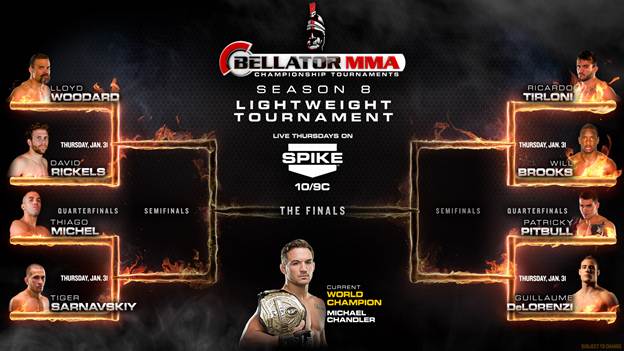 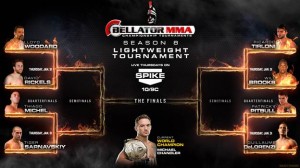 The bracket for Bellator’s upcoming lightweight tournament is officially set, as eight fighters are slated to compete for a shot at the organization’s $100,000 prize and a guaranteed title fight.

The tournament, which kicks off on Thursday, January 31st at Michigan’s Soaring Eagle Casino & Resort, will be broadcast live on Spike TV, with the preliminary card set to stream live online at Spike.com.

Ricardo Triloni taking on Will Brooks in the quarterfinals of the lightweight tournament completes the field. Brooks spoke on the opportunity to compete in the Bellator tournament.

“I’m just really excited about this opportunity, the whole idea of a tournament really gets me going, and I just love it, and it’s why I wanted to come to Bellator,” Brooks said. “This is what it’s all about, and I’m ready to go out and get it. Fighting on Spike is dream, this organization is on the rise, and I can’t wait to be a part of it. When I have millions of people watching, that’s when I step up my game, and it’s exactly what you will see on January 31st.”

Triloni is coming off a tough split decision loss in his last outing against Dave Jansen, but will be looking to get back on track against the undefeated Brooks.

With Tirloni vs. Brooks set, the field is now complete as Lloyd Woodard will battle David Rickels, while Thiago Michel will take on Tiger Sarnavskiy, and Patricky Pitbull battles Guillaume DeLorenzi.

Tickets for the event are on sale now and are available at StarTickets.com, Bellator.com and The Soaring Eagle Casino & Resort Box Office. Tickets are priced from $20-$65. The event will broadcast LIVE starting at 10 p.m. EST on Spike, as well as in Spanish language on mun2. The preliminary card will be streamed LIVE and FREE on Spike.com starting at 8 p.m. EST.