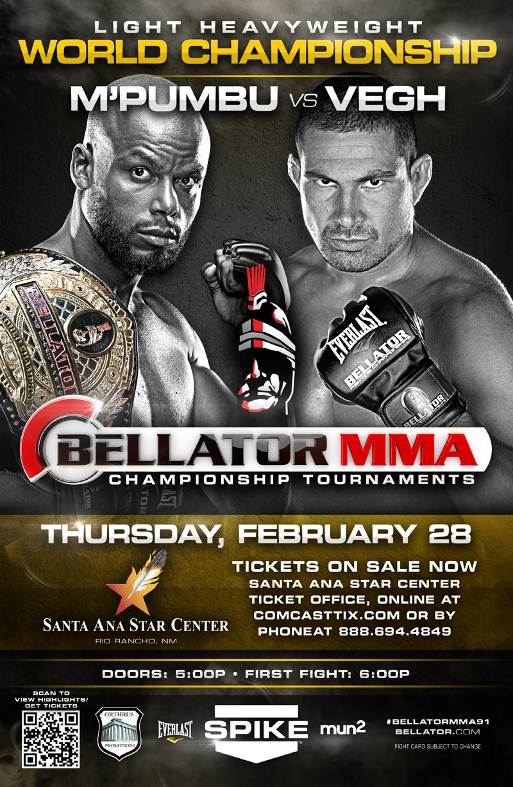 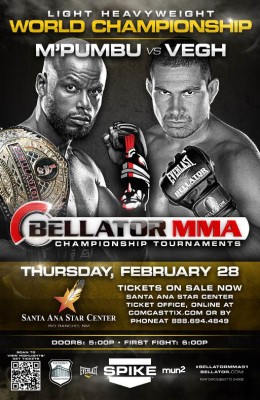 Bellator MMA officials today announced that Bellator MMA light heavyweight champion Christian M’Pumbu (18-4) will put his title on the line against Atilla Vegh (28-4) at Bellator 91 on February 28. The event will air LIVE on SPIKE TV and will take place at the New Mexico’s Santa Ana Star Center.

M’Pumbu became the inaugural Bellator light heavyweight champion and won three fights via KO/TKO, but suffered a setback in his last outing losing to Travis Wuiff in a non-title bout in October 2011.

Vegh earned the shot at M’Pumbu by winning the Bellator light heavyweight tournament knocking out MMA veteran Travis Wuiff in the finals.

“This fight is all I am focused on,” Vegh said. “I’ve never worked harder for something in my life, and on February 28th, I will hold that belt and become the new Bellator World Champion.”

Tickets for the event are on sale January 11th and range from $25-$90. Tickets can be purchased at ComcastTix.com, Bellator.com or by visiting The Santa Ana Star Center box office. The event will broadcast LIVE starting at 8 p.m. MST on Spike, as well as in Spanish language on mun2. The preliminary card will be streamed LIVE and FREE on Spike.com starting at 6 p.m. MST.

Be sure to stay close to ProMMAnow (www.prommanow.com) for more Bellator 91 news and coverage.