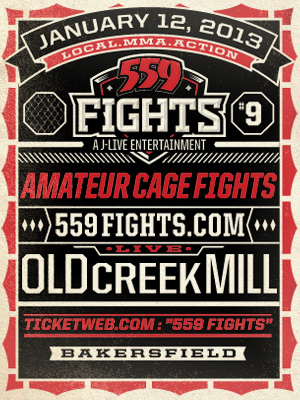 BAKERSFIELD, Calif. – Holt Felkins puts his perfect mixed martial arts record on the line this Saturday at the Old Creek Mill in Bakersfield.

The Eric Nolan’s product will be representing Bakersfield with his 2-0 amateur MMA record against Sacramento bantamweight Joseph Morales, who enters the cage with a 3-0 mark.

Tickets for the 13-bout event start at $25 and can be purchased at the Old Creek Mill located at 424 24th Street, Hooters of Bakersfield or at  www.559fights.com.

“This is going to be a fun event for the Bakersfield area. We are really happy to be back there doing another MMA event, because the fighters, fight camps and fans were so great last time,” 559 Fights president Jeremy Luchau said. “Holt Felkins is as good as they come at the amateur level. He’s very exciting and technical and I think the matchup with Morales might be one of the best of the early year.”

In the co main event, 559 Fights is featuring the women’s flyweight division pitting Bakersfield’s Kathy Soloranzo against Delano’s Cynthia Banuelos-Hernandez. Both women will be making their amateur debuts.

Also in the women’s division, Bakersfield’s Veronica Luna makes her debut in the featherweight division against Delano’s Cerise Sanchez (1-0).

“We are looking forward to having more women’s fights on our cards and it looks like the Bakersfield area is prime for these type of fights,” Luchau said. “The women’s fights area always exciting.”

“Both the Bustamante vs. Hernandez and Hernandez vs. Garcia bouts could have main evented any card we’ve put together,” Luchau said. “I think that just shows the depth we’ve really put together for our return to Bakersfield.”

Weighins will be held Saturday at 10 a.m. at Hooters of Bakersfield. Weighins are open to the public.