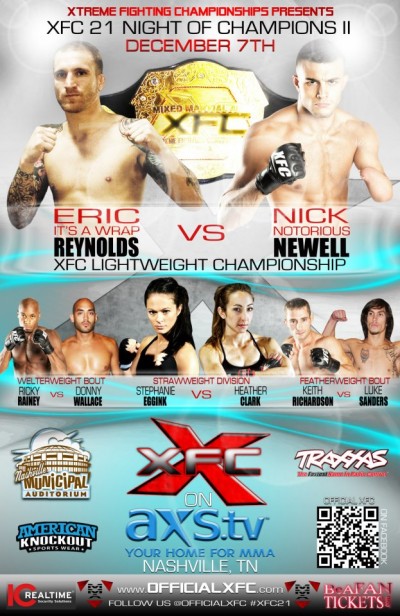 NASHVILLE, Tenn. — “XFC 21: Night of Champions 2” takes place this evening at Municipal Auditorium in downtown Nashville, Tenn. The event is headlined with a lightweight title bout between “Notorious” Nick Newell and Eric “It’s a Wrap” Reynolds.

Round 1 -Stewart drops Hicks with a big right hand and they scramble. Feeling out first round goes to Stewart.

Round 2 –  Takedown by Hicks. Working ground and pound. Body, body head working.  Round to Hicks.

Round 3 – Takedown by Hicks. Stewart working his guard well. Ref stands them up. Big right by Stewart hurts Hicks. Stewart trying to finish. Bell saves Hicks. Give it to Hicks for ground work.

Round 2 – High kicks exchanged. Spinning back kick lands for Jorge. Single attempt by Jorge, scramble on the feet then a slam by Jorge into side control. Working for Kimora and DJ escapes back to his feet. Big take down for DJ at the bell but not enough, round 2 to Jorge.

Round 3 – Punch kick combo by DJ lands. Take down for DJ and they scramble back to their feet. Knee by DJ is caught by Jorge and takes him down into side control. Now mounted DJ fighting off arm lock. Jorge takes DJ’s back and a quick rear naked choke ends it.

Round 1 – Tommy much taller of the two fighters. Tommy working the jab. Josh closes the distance and clinches. Take down for Josh into Tommy’s guard. High guard for Tommy as Josh drops some right hands. Ref stands them up. Tommy presses the fight to the cage. Take down for Tommy and he has Josh’s back. Big left hands to Josh’s head has him covering up. Josh is now flat taking big shots. Ref stops it. TKO for Roberts.

Round 1 – Jab by Gerric lands. Gerric landing low kicks. Clinching and Gerric lands a knee. Jason landing quick combos and has Gerric covering. Good kick boxing by both fighters. Combinations by Gerric landing well. Hard leg kick by Gerric. Jason circling getting in and out fast. Take down by Gerric into side control. Now to the mount Gerric working for a Kimora. Bell sounds. Round one to Gerric.

Round 2 – Jason landing big lefts and has Gerric stunned early. Tai clinch by Gerric landing big knees has Jason falling back. Fight goes to the mat and Gerric has the mount. Gerrric on Jason’s chest raining big punches. Jason rolls and escape. Huge combination by Gerric blows up Jason’s nose. Jason knocked down and turtling. Huge right hands by Gerric from Jason’s back forces the ref to stop it. Gerric by TKO.

Round 1 – Not toch of gloves. Richardson comes forward throwing. He closes and lands a kick. To the clinch now. Richardson steps back and throws a one-two combo. He’s coming forward to start. Nice clipping left hand by Card lands. Richardson clinches again and puts Card on the cage. They break. Richardson goes high with the kick but it’s blocked. Back to the clinch. Richardson presses Card on the cage but can’t get the takedown, but lands inside with a blistering right hand. Card looking to counter, then catches Richardson coming in. He then close and gets the first takedown of the fight. Richardson looking for an arm early. He uses it to sweep and is now on top looking to pass. Card uses the cage to stand up and eats a knee just as he gets to his feet. Richardson still battling for a takedown. Nice knee inside by Card from the clinch. Richardson with a knee of his own. They reset. Richardson comes forward and eats a right hand. He steps back then gets dropped with a right hand. Card comes forward looking for a standing guillotine. He lets it go and they take the center of the cage. Inside leg kick Card. Counter right by Richardson. Nice lead right by Card scores. He closes and puts Richardson on the cage. Big overhand right from Card on the reset. Knees from Richardson, clinches looking to get a late takedown in a very close round. He gets a bodylock takedown at the bell. That may have been the difference in the round. PMN scores Round 1 for Richardson, 10-9.

Round 2 – Richardson comes forward and gets caught with a huge right hand that sends him to the canvas. Card immediately looks for the choke and it looks tight! Richardson is in trouble. The tap never comes. He’s unconscious on the mat. Huge win for Jarrod Card.

Round 1 -Polar opposites in this one. Wallace is intense, Rainey is calm and collected. They are feeling each other out early. Wallace rushes forward and dips in after throwing a wild right hand. Rainey lands a big knee up the middle. Jab by Rainey. Wallace is looking for an opening. He shoots in and clinches. He puts Rainey on the cage but can’t get the takedown. Overhand right from Rainey lands flush and drops Wallace. Wallace tries to shake it off but gets caught with a big knee and a short right hand that puts him back on the mat. A flurry of shots later the referee steps in and stops it. Nice finish for Rainey.

Round 1 – Local favorite D. West at 205! Huge right hand from West to start. Finch counters with a right of his own. Double jab, then a big straight right hand from West. Finch swings, and as he dips in he lands a flush headbutt that drops West. As he hits the mat, the rerferee steps in and stops it. It was VERY clear that it was a headbutt that dropped West. Tough break for him in this one.

Round 1 – Eggink takes the center of the cage. Clark comes forward and throws a flurry of right hands. The last one connects. Big winging right hand counter lands for Clark as Eggink throws her jab. Nice straight jab from Eggink. Eggink is working to establish her jab, throwing straight punches. To the clinch now. Eggink puts Clark on the cage. Short left hand inside scores for Eggink. She’s working hard to get this fight to the mat. They are battling on the cage. Inside knee from Eggink. Clark fires back with knees. They break. Big exchange in the middle of the cage. Eggink with a nice straight jab, then leg kick. Clark is landing with more power in the exchanges. Back to the clinch now. Clark lands with a nice knee inside and works to drag Eggink to the ground. Eggink ends up on her back and immediately goes for the arm bar. It looks tight. Clark rolls to free her arm but is still in trouble. Clark steps over as time winds down on the round. Close round. PMN scores the first for Eggink, 10-9.

Round 2 – Eggink bouncing around the cage. She lands a lead left hook as Clark steps in throwing. Eggink with the leg kick. Clark is circling, then leans in with a winging right hand. Clark steps in and gets an early takedown. Eggink did really nice work from her back late in the first round. She looks really comfortable here. She’s looking for an arm again. Clark stacks her and is out of trouble. Eggink transitions to the triangle now. It looks super tight. Clark somehow survives and rolls out of trouble. Clark is now in side control, no, half guard as Eggink sneaks a leg in. Eggink keeps working as Clark stands over her and is looking to reverse. Clark has head control as Eggink secures the leg and works two-on-one. Eggink scrambles to her feet and is standing over the guard of Clark. Clark goes for a leg and eats some shots from Eggink from the top. Eggink takes her back after a scramble, the transitions to the full mount. Clark rolls giving up her back. Eggink postures and lands some big shots from the top. She flattens her out and is landing big right hands from the top. Big shots as the round ends from Eggink. Dominating round for Eggink. Wow!! PMN scores round 2 for Eggink, 10-9.

Round 3 – Eggink working her jab early. Landing laser straight shots. Clark is stalking but Eggink is landing nice shots from the outside then circling out of range. Nice work form Eggink. Clark lands a kick but it’s clear that Eggink’s confidence is building as this fight goes on. Jab, body from Eggink. Clark steps in and lands a right hand. Clark’s face is clearly showing the damage that Eggink has inflicted. Great footwork from Eggink. She’s using great angles and not leaving much of a target for Clark. Double jab from Eggink. Clark finally lands a big shot, then closes, putting Eggink on the cage. Nice knees from the inside by Clark. Eggink reverses and punishes Clark with knees. Big left hook from Eggink. Clark lunges forward, and Eggink simply steps to the side and lands a flurry. Eggink avoids a takedown then they flurry to the bell. PMN scores the round for Eggink and the fight overall to her as well, 30-27.

Round 1 – Jab from Hill as Thomas lands  a kick. Overhand right from Thomas. Hill ducks in and secures an easy takedown. Thomas scrambles and gets back to his feet, then looks to take Hill to the mat. Hill spins and puts him on the cage. Inside knee from Hill. Again. Thomas is fighting off the takedown, but Hill uses his length to get a trip takedown. Hill is on top now. Big right hand from the top. Thomas throws his legs up but Hill is defending nicely. Hill goes to the body. Thomas throws his legs up and is looking for the triangle. Hill picks him up and drops him on his head but cannot free his arm. Thomas has the arm and the tap comes almost immediately.

Round 1 – This is for the belt! No touch of gloves. Big kick from Newell to start. Again. Big body kick from Newell. Nice exchange. Big right hand from Newell. These guys are throwing. Body kick by Reynolds. Newell ducks in and gets a huge suplex. He has the back of Reynolds and is looking for the RNC!! It looks tight!!! Reynolds falls back and the choke is TIGHT!! The tap comes it’s over. Nick Newell is the champ!!