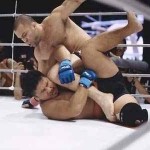 WARSAW, Poland – Saturday, December 1st was a big evening for European MMA. BAMMA 11 took place in Great Britain, but also in Poland the promotion considered by many as the best European MMA organization, KSW, held their 21st show in Torwar Hall.

The show started with an all-American bout between Kings MMA fighter, Matt Horwich (28-21-1) and the heavy-handed Terry Martin (22-11). After some exchanges in standup both fighters clinched and when it hit the ground, Horwich showed what he can do.

Horwich transitioned from closed guard to the back multiple times and threatened Martin with gogoplata and omoplata attempts. He ended up winning the bout in the second by strikes from the back mount. At the post-fight press conference Horwich asked journalists, “How much I need to pay for a little house in Poland?” I told him, “Matt in Poland real estate’s prices starts from 30 000 bucks.”

KSW fans waited over two years to see Krzysztof Kulak (25-13-2) in the white KSW ring again. Czestochowa’s own fighter faced off fast rising prospect, Piotr Strus (8-1). Strus is a wu shu world champion, recently won the World Cup in China and came to show some of his kung fu moves in the ring.

The fight was all standup, where the faster and more confident Strus punched and kicked Kulak. After the second round the Warsaw fighter was able to hurt Kulak’s leg with a low kick and the former KSW middleweight champ did not want to continue the fight.

The first championship fight on the card was a duel between WEC and UFC vet, Maciej ‘Irokez’ Jewtuszko (10-2) and Artur ‘Borer’ Sowinski (12-7). These two fighters collided at KSW 17 and Sowinski won an upset by knocking Jewtuszko out in the very first round.

The Szczecin  fighter said this time would be different and he kept his word. Sowinski started strong with some takedowns, but at the end of the first round Jewtuszko scored a takedown of his own. In the second round the former UFC fighter took ’Borer’ down and opened a cut under his eye.

The fight ended with a D’Arce choke, which Jewtuszko started from half guard. Sowinski defended it for some time, but ultimately was forced to tap. Maciej Jewtuszko avenged his first loss in Poland and now will likely face Curt Warburton to try and avenge his loss in the UFC.

Arrachion MMA fighter, Aslambek Saidov (13-3), after a loss in October in Denmark, returned to defeat Borys Mankowski (13-5) after the Ankos Zapasy Poznan fighter suffered an injury in the second round.

The fight started slowly, both fighters tried to engage in boxing exchanges with the Chechen-born fighter getting the advantage. Then Saidov was able to defend, clinch and get a takedown. Mankowski defended well in the guard, but lost the first round.

The Pole was injured in second when he missed with a punch and could not defend Saidov’s takedown. He screamed in pain, but tried to defend. Saidov did not let him escape from side control and the referee stopped the fight.

In the co-main event Szczecin’s own Michal Materla (18-3) needed only 21 seconds to defend his international KSW belt against UFC vet Rodney Wallace (14-6). The Pole hit the American with a right hand to the temple and landed several unnecessary ground strikes.

Materla thanked his mom after the fight and the “badass mother-f___ers” from Berserker’s Team where he trains. Materla was very happy at the press conference where he joked throughout.

Wallace said that he did not deserve to be on the KSW poster and it was a hopeless performance. It is not certain what is next for Wallace although there is talk he could face Piotr Strus at KSW 23.

In the main event KSW superstar Mamed Khalidov (26-4-2) submitted Kendall Grove (17-11) in the second round with a footlock. Khalidov tried to close the distance with hooks, but in the first Kendall defended well against the Chechen’s single-leg takedown attempts.

Both fighters smiled and took the fight easy. Khalidov was able to take Grove down in the second and immediately went for the leg. Khalidov went for a heel hook, but could not get it and transitioned to a footlock. Kendall tapped to this hold and after the fight invited Khalidov to come to Hawaii.

The full KSW 21 fight results are as follows: