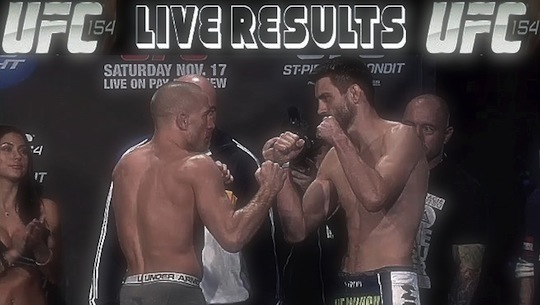 In the co-headliner, top-10 ranked welterweights Johny Hendricks and Martin Kampmann will clash to see who will move one step closer to a title shot.

ProMMAnow.com (www.prommanow.com) will provide LIVE results and play-by-play commentary of UFC 154 beginning with the Facebook prelims at 6 p.m. ET, then moving to the FX broadcast at 8 p.m. ET and finally to the Pay-Per-View broadcast at 10 p.m. ET.

Round 1 – No touch gloves. Left from Elkins out of the clinch. Big leg kick from Siler. Leg kick again inside from Siler. Again. Clinch and a knee from Siler to the body. Right from Elkins, pushes Siler to the cage. Knees from Elkins, Siler avoids the takedown. Knee from Elkins, again. Gets a body lock takedown, now on top, side control. Siler instantly gets full guard, lands elbows from his back. Elkins postures up but Siler defending. Elkins lands a one two from top. Elkins moves to side, but Siler instantly gets half guard. Elkins looking for a guillotine, lets it go. Couple of left hands from Elkins. Siler regains guard, gets to his feet, lands a right but Elkins puts him right back down. Siler tries to get up. Elkins goes for a guillotine. Siler defending, is free. PMN scores it 10-9 Elkins.

Round 2 – Hackleman wants more punches from Siler. Leg kick from Siler and Elkins times it perfectly putting him on his back. Elkins in half guard, working on a neck crank. Lets it go as Siler pulls guard. Nice left from Elkins. Siler tries to kick him off. Lands an up kick. Pushes him back, lands a nice up kick. Elkins lands a hammerfist and a punch, takes Siler’s back as he tries to get up. Elkins looking for the choke, has one arm under the neck, Siler escapes immediate danger but Elkins still on his back with a body triangle and landing punches softening Siler up. Elkins locks on the choke but Siler is able to get a hand in there to defend. One minute to go. Elkins locks on the choke, lets it go as Siler lands several punches behind him. PMN scores it 10-9 Elkins.

Round 3 – Left hook from Siler. Jab from Siler and Elkins connects. Knee from Siler out of the clinch. Right counter from Siler as Elkins scores. Right from Elkins. Knee from Siler. Elkins puts him down but Siler works his way back up using the cage. Right from Elkins. Siler moving forward. Elkins shoots for a single, ends up putting him on his back, full guard from Siler. Big right from Siler off his back. Two minutes to go. Left from Elkins as he postures up. Siler knows he needs a finish. Siler with a rubber guard, mission control. Siler gets to his feet with one minute to go. Elkins gets another takedown, the sixth of the fight. Siler gets up but Elkins still on him, lands an elbow on the break. Siler has a front headlock as Elkins shoots. PMN scores it 10-9 and 30-27 for Elkins.

Round 1 – Griggs comes in fast, gets dropped with a straight left. Diabate lays in side control on top. Griggs pushes him off and gets up but Diabate gets a body lock takedown. Griggs bleeding  from his nose; may be broke. Gets to his feet. Diabate still holding him, lands a knee or two as they go back down. Back to the feet. Diabate goes for a rear naked choke and Griggs taps out.

Round 3 – Leg kick inside Garza. Hominick stalking, jab. Leg kick Garza. Right from Hominick. Front kick Garza. Garza gets the takedown. Elbow from Garza. Garza inside Hominick’s guard and working the ground and pound once again with two minutes to go. Hominick with palm strikes to the side of the head. Elbow from Garza, more punches. Hominick pushes him off, gets to his feet. But doesn’t last long as Hominick tries to roll for an omoplata and ends up right back on the bottom again taking damage. Hominick throws up for an armbar. PMN scores the round 10-9 and 29-28 for Garza.

Round 2 – Leg kick dos Anjos. Bocek with a low kick that lands in the groin of dos Anjos. Time is called. Bocek shoots, stuffed, left from dos Anjos and he takes Bocek to the ground. Dos Anjos looking for a kimura and then an armbar. Bocek gets out of danger and back to his feet, looking to put dos Anjos down but dos Anjos defends and has Bocek against the cage. Bocek cut and bleeding. Leg kick from Bocek. Leg kick Bocek. Bocek shoots, stuffed. Dos Anjos puts Bocek down, he turtles. Dos Anjos landing several right hands looking for Bocek’s back. Hammerfists from dos Anjos as Bocek turtles, then gets up. Dos Anjos puts him down again. Bocek gets up, eats an elbow. Leg kick Bocek. PMN scores the round 10-9 dos Anjos.

Even some of the Canadian crowd is booing the decision.

Round 1 – Touch gloves. Hendricks looks for the left backing Kampmann up. Hendricks with a right, then a left and Martin Kampmann falls back lack a tree, he’s done. Hendricks follows up with one more left to the chin of his downed opponent and Mirgliotta stops the fight before Kampmann takes any more damage.

Round 1 – Oh shit. GSP looks to be in great spirits and great shape. Confident. GSP pressing. Leg kick from GSP. Dodges a leg kick. GSP pressing with punches, leg kick. Front kick. One two from Condit. Leg kick from GSP. Condit with a jab. GSP with a jab, shoots, puts Condit on his back. Condit with mission control, lets it go. GSP inside the guard. Goes for an armbar, GSP pulls out. GSP to half guard. Big elbows from GSP. Condit landing shots off his back. Ground and pound from GSP. GSP postures up, back inside full guard. Punches off his back from Condit.  He stacks Condit with punches. Thirty seconds to go. Nice elbow from GSP. Condit looks for a leg, GSP pulls out. Condit cut over his right eye. PMN scores it 10-9 GSP.

Round 2 – Jab from GSP. Front kick from GSP. Body shot Condit. Nice right from GSP. Right from Condit. Head kick GSP, mostly blocked. Jab from GSP. One two from Condit. Right from Condit, body shot. Right counter from GSP after Condit went for a Superman. Condit bleeding from the nose. Jab from GSP. GSP times the leg kick and puts Condit on his back, moves to half guard, elbow to the cut on Condit’s head, postures up with a big left hand. Condit is bleeding like a stuck pig. Inside full guard now, ground and pound. Condit throws up his legs looking for an arm. No dice. Elbows off his back from Condit. GSP stands up, lands a left as Condit stands. PMN scores the round 10-8 for GSP.

Round 3 – Jab, leg kick from GSP. Head kick from Condit drops GSP, he jumps on him, landing body shots. GSP trying to get up. Condit inside full guard, dropping elbows. GSP gets to his feet. Jab from Condit. Jab from GSP. One two from GSP, he slams Condit. Three minutes to go. Condit punching off his back. GSP has slowed his pace but he lands and elbow. GSP swelling over his eye. Condit landing elbows off his back and attacking GSP’s swollen skull. GSP backs him into the fence, his neck crunched between the cage and floor. GSP lands some shots but Condit gets to his feet. GSP has a leg. Condit looking for a kimura, GSP puts him back down, body shots. GSP moves to half guard.  PMN scores the round 10-9 for GSP.

Round 4 – Leg kick Condit. Head kick from Condit. GSP with a head kick, shoots and puts Condit down again. Side control. Condit recovers half guard. Body shots from Condit from the bottom. Condit gets full guard. GSP moves to half guard. Elbow from George. Mission control from Condit. Condit going for the left leg of GSP. Big left hand from GSP as he postures up. Condit’s face a bloody mess. Condit gets to his feet. GSP tries to drag him down, Condit reverses. GSP gets back up and puts Condit right back down. Condit looks for a kimura, no dice. GSP on top in full guard. Condit gets to his feet but dragged down at the bell. PMN scores the round 10-9 for GSP.