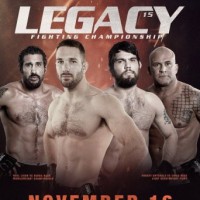 Legacy Fighting Championship 15 went down in Houston to a crowd that had to be a little happy to see a night of exciting finishes. Fifteen fights lined the event while seven bouts made it live on AXS TV.

Robert Drysdale had little trouble at all staying unbeaten. Drysdale squared off with Chris Reed in the main event  at the Houston Arena Theatre. The action began and Drysdale looked for the takedown early. He shot in early and grabbed a single leg. Reed attempted to stop the inevidable but he couldn’t . Drysdale transitioned perfectly from a choke attempt to an armbar. After only 75 seconds of action Reed tapped out.

In the co-main event Ray Blodget came out kicking. Literally. Blodget controlled Gonzalez using sharp low kicks to throw off the timing and prevent Nick from moving forward. He tood the advantage in round 1. Rounds 2 and 3 belonged to Gonzalez. It was easy to see Blodget was gassed out as he started to fade in round 2. He tried to muster up an assault in Round 3 but it wasn’t enough. Gonzalez was accurate with his striking and won the later rounds. The only decision on the main card went the way of Nick Gonazlez.

Flyweight up and comer Matt Schnell kicked things off for the AXS TV crowd. Making his sophomore appearance in the Legacy FC cage he didn’t waste much time at all to move to 2-0 in his young career. Schnell dropped Marcus Duper early and went to the canvas with him. He locked in a guillotine that Duper was able to get out of. His head was free but so was his arm and Schnell capitalized with a great arm bar.

This was an entertaining card that was fan friendly with the big knockout of Angel Huerta over Sali Elizondo . All but one of the main card bouts ended in the first round.