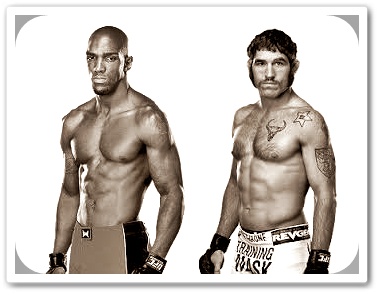 The UFC 154 main card will feature a middleweight fight between quickly rising MMA veteran Francis Carmont and TUF alum Tom Lawlor. Carmont has quietly won three consecutive fights in the UFC and is starting to build a little buzz among some hardcore fans.

This fight should be a good litmus test to see where he is against a tough and gritty fighter like Lawlor. Let’s see how this one breaks down.

Tom Lawlor (8-4, 1NC) is coming off the KO win over Jason MacDonald at the UFC on FUEL TV 3 event in May. Lawlor is (3-3) in the UFC since defeating Kyle Kingsbury at the TUF 8 Finale in 2008. Lawlor has won three fights via TKO/KO and three fights via submission. He’s been submitted in two of his losses, but has never been finished via TKO/KO. Lawlor is a grinder with a wrestling background, but is also versed in submissions.

Francis Carmont (19-7) is coming off the second round submission win over Karlos Vemola at the UFC on FUEL TV 4 event in July. Carmont is riding high right now with two of his three wins coming by way of submission. Carmont has 10 career wins by way of submission and six wins via TKO/KO. He has been submitted three times in his MMA career, and finished once by way of TKO/KO.

Carmont is the larger, more athletic fighter with a huge reach advantage going into this fight. Carmont has faced a similar fighter in his last outing in Vemola and passed with flying colors. Vemola was only able to take him down once out of eight takedown attempts. According to Fightmetric, Carmont has defended 92% of the takedown attempts against him while landing strikes at a 74% clip. However, the major difference between Vemola and Lawlor is that Lawlor has good power in his strikes. That and Lawlor has the much better weigh-in routine.

It’s going to be a tall order for Lawlor to win this one. He’ll need to have excellent cardio while finding a way to negate the huge reach advantage of Carmont. He can do that by closing the distance and trying to take Carmont to the mat, which is where the cardio will come into play. If he’s not in shape he’ll likely be gassed by the middle of the second round if the fight goes that far. If Lawlor realizes the takedown isn’t going to come, he’ll need t bail on that and look to land power shots from close quarters and then separate afterwards. Carmont has shown that he’s dangerous in the clinch position so he will not want to play with fire too much.

I think Carmont continues to shine in this fight. Lawlor has a puncher’s chance in this fight and that’s about it. There’s a very small chance that he could outstrike and have the cardio to grind out a decision win over Carmont. In all likelihood, Carmont will wear Lawlor down and submit him at some point in the second round.