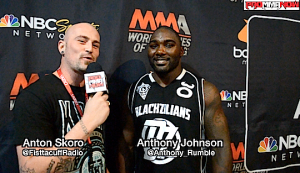 ProMMAnow.com (www.prommanow.com) reporter Anton Skoro caught up with Johnson after the bout to get his thoughts on his performance, his continuing success at light heavyweight, if he has any intention of returning to the UFC and how things have changed for him since teaming up with the Blackzilians.

You can keep up with Anthony Johnson on Twitter at @Anthony_Rumble, World Series of Fighting at @MMAWorldSeries and Anton Skoro at @FisttacuffRadio.