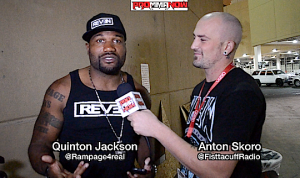 Rampage shared his thoughts on fatherhood and the difference between “Rampage” the fighter and Quinton Jackson. He also talked about dressing up as Batman for Halloween and how much fun he had driving around in his lime green Lamborghini dressed as Batman.

With just one fight left on his UFC contract, Rampage explained why his future as an MMA fighter will likely be outside the UFC Octagon:

“It don’t feel right in the UFC with me no more. I just feel like I don’t get compensated for all the stuff that I do for the UFC. I try to put on exciting fights and stuff like that and I don’t understand them, so I don’t want to talk down on them. They’re a good company and they know what they’re doing. They’re looking out for their brand. I’m looking out for my brand. I bet you when I go, and I go to the right place, I bet you a lot of fans will follow cause I’m going to put on great fights. Watch what I do to my next opponent. Watch how I serve up Glover. Watch. I’m not going to talk about it. I’m going to be about it.”

And Rampage has no intentions of leaving the UFC on a loss when he matches up with Glover Teixeira at UFC on Fox 6 January 26 in Chicago:

Rampage also explained why he did not want to coach The Ultimate Fighter opposite Chael Sonnen. He would not however give any insight as to what organization he would like to fight with after the UFC — which is probably a smart thing at this point.