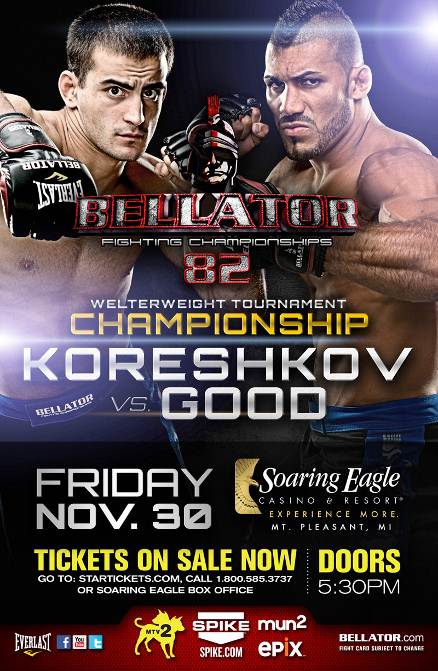 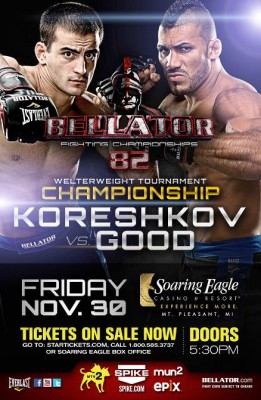 The Season 7 Welterweight Tournament Finals are set as Lyman “Cyborg” Good is ready to lock horns with the always dangerous Andrey Koreshkov at Bellator 82 on November 30th, from The Soaring Eagle Casino & Resort in Mount Pleasant, Michigan.

Ticket prices range from $25-$60 and can be found at StarTickets.com, Bellator.com and The Soaring Eagle Casino & Resort Box Office.

Bellator 82 will air LIVE on MTV2 and in commercial free HD on EPIX, as well in Spanish language on mun2. The preliminary card will stream exclusively on Spike.com.

A welterweight fight between David “The Caveman” Rickels and Jason “The Finisher” Fischer will do battle on the card. Fischer will be fighting in front of the hometown crowd in Michigan and spoke on the opportunity to fight in front of family and friends.

“I’ve been incredibly lucky to collect two huge victories with Bellator, so to get this opportunity to fight David Rickels in front of all my friends and family, it really is a dream come true,” said Fischer. “The University of Central Michigan is like a second home to me, so I’m counting the days until November 30th.”

Two fighters will be making their Bellator debuts as kickboxer Michael Page will be taking on Olympic wrestling qualifier Shawn Bunch. The fight will be the professional debut of Bunch who spoke on his journey to the Bellator cage.

“I’ve had my sights set on Bellator for a long time,” Bunch said. “While I’ve been training in MMA for over four years, I’ve never been able to fully focus on the sport with my wrestling obligations. After watching guys like Ben Askren and King Mo, guys I really look up to in this sport have success, I knew the time was right to make the move to Bellator.”