Hacran Dias vs. Chad Mendes added to UFC on FX 6 in December 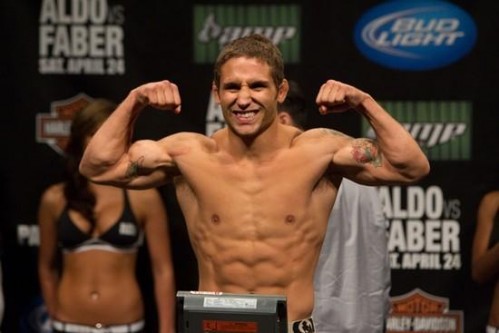 A new bout has been added to the UFC on FX 6 card as Hacran Dias (21-1-1) faces Chad Mendes (12-1) in a featherweight showdown. The event is set to take place at the Gold Coast Convention and Exhibition Centre in Broadbeach, Gold Coast, Australia, on Dec. 15.

UFC on FX 6 will feature a headline bout between “TUF: The Smashes” coaches Ross Pearson and George Sotiropoulos. The main card will air LIVE on FX with the prelims set to air on FUEL TV.

Hacran Dias is currently riding a nine fight winning streak, most recently defeating Yuri Alcantara via unanimous decision at UFC 147 in June. Prior to that he defeated Paulo Dantas via second round submission at Shooto Brazil 27 in December 2011, and picked up a first round submission win over Eddie Hoch at Shooto Brazil 25 in August 2011. Dias will no doubt look to make everyone aware of his presence in the UFC with a big performance against Mendes.

Meanwhile, Chad Mendes last fought at UFC 148 in July, where he scored a first round KO win over Cody McKenzie. Prior to that he suffered a first round KO loss to current UFC featherweight champion Jose Aldo at UFC 142 in January. Before that bout Mendes was unbeaten as a pro, defeating notable fighters such as Erik Koch, Cub Swanson, Michihiro Omigawa and Rani Yahya. A big win over Dias should put Mendes back into title contention.

4 thoughts on “Hacran Dias vs. Chad Mendes added to UFC on FX 6 in December”