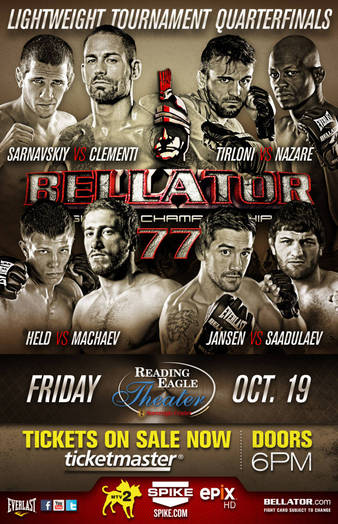 Bellator 77 takes place this evening at Reading Eagle Theater in the Sovereign Center in Reading, Penn. and features the opening round of the Season 7 lightweight tournament. The preliminary card airs live on Spike.com starting at 6:30 p.m. ET, while the main card airs live on MTV2 starting at 8 p.m. ET.

A LIVE stream of Bellator 77 is also available on ProMMAnow.com.

Round 1 – Brooks with a right inside leg kick, but Horcher counters with a huge overhand left, followed by a left uppercut catching Brooks on the way down and Brooks is out cold. Twenty-one seconds flat. Horcher stands over Brooks but sees he is out and resists throwing any unnecessary shots.

Horcher (6-0) is the alternate for the lightweight tourney.

Round 1 – Touch gloves. Tirloni with a lead left hook, inside leg kick, eats a right. Nazare with a left, then a single leg takedown, but Tirloni gets right up. Nazare leaning on him against the cage. Tirloni goes for a standing guillotine, lands some knees to the thighs. Another knee, and another to the thigh. Nazare gets out of the guillotine, lands a right. Jumping knee from Tirloni, goes for a trip takedown, Nazare defends and shoots for the single, turns the corner and puts Tirloni down. He pops right up, clinched, knees from Nazare. Body lock from Tirloni, turns Nazare to the cage. Knee from Tirloni, lands a left. Tirloni slips to the ground after an exchange. He gets right up, Nazare puts him against the cage. Thai plum and a couple knees from Tirloni. Knees and a foot stomp from Nazare. Exchange knees. Couple of left hooks from Tirloni. Stuffs a takedown attempt from Nazare. Clinched, exchange knees. More knees from Tirloni –four to be exact. Another. Nazare with a knee. Another, still clinched. Left hook from Tirloni, clinched. Knee from Tirloni, again. Nazare pushes him to the cage, body shot. More knees to the body from Tirloni. Nazare backs up and lands a couple big punches. Body shot from Tirloni. PMN scores the round 10-9 Tirloni.

Round 2 – Nazare landing some big combinations, including a big left that puts Tirloni on his heels. Tirloni counters and staggers Nazare with a right, he shoots on Tirloni. Tirloni locks on a D’arce as he sprawls and Nazare taps out before being choked unconscious. (By the way, both Nazare and Tirloni are BJJ black belts)

Round 1 – They tie up against the cage, Machaev backs out. Big one two from Machaev counters a low kick. High kick from Held. Left hook from Machaev. Spinning back kick from Held misses. Right hook from Machaev. Held chasing him, throws a one two, shoots and puts Machaev down. Held landing punches and a knee as Machaev makes his way to his feet. Held grabs the single, almost gets Machaev back down. Right hand from Machaev. Held pressing. Machaev with the punch combo stops the forward movement of Held momentarily, but he’s right back as the aggressor. Spinning backfist from Held, shoots, puts Machaev down, takes his back, he’s high, slips off, goes for a leglock and the bell sounds as Machaev pulls out. PMN scores the round 10-9 for Held.

Round 1 – Leg kick from Saadulaev. Front kick to the gut, inside leg kick. Shoots, puts Jansen down. Jansen holding onto his neck, lets it go, looks for a kimura. Saadulaev tries to hold him down but Jansen reverses position, Saadulaev gets to his feet as Jansen drops levels looking to keep him down. Saadulaev with a standing guillotine attempt. Jansen with a takedown but Saadulaev takes his back with both hooks in. Jansen rolls as Saadulaev is in back side control landing hammerfists. Now, north-south. Jansen ends up on top in side control with one minute to go. Jansen gets full mount. Saadulaev immediately gets to his feet. Shoots, stuffed. Front kick. Leg kick from Jansen, shoots, puts Jansen down but Jansen catches him in a guillotine. Saadulaev escapes to his feet before the bell. PMN scores the round 10-9 Saadulaev.

Round 3 – They tie up as Saadulaev shoots. Jansen jumps into a guillotine, full closed guard and Saadulaev goes unconscious. The ref stops the bout and Saadulaev’s head falls to the canvas… he’s out cold.

Round 1 – Clementi shoots after getting tagged. Takes Sarnavskiy’s back while standing. Clementi softening him up with right hands. Sarnavskiy fighting for wrist control. After a couple minutes, still in same position. Clementi still softening him up with right hands. Hammerfists from Clementi, still standing with both hooks in on Sarnavskiy. Clementi locks on the choke and finally pulls Sarnavskiy straight back and they fall to the ground. Holy cow Sarnavskiy fights through it and gets Clementi’s hand/arm off and survives. PMN scores the round 10-9 Clementi.

Round 2 – Touch gloves. Clementi misses an overhand right and pays for it with a big left. Clementi shoots, puts Sarnavskiy on his back. Passes to side control as Sarnavskiy holds his neck. He gives up his back to Clementi, both hooks in now. Clementi looking for the choke with 3 minutes to go. Clementi with a body triangle and softening Sarnavskiy up with punches and hammerfists. One minute to go. Sarnavskiy escapes, stacks Clementi, lands a couple body shots and punches to the face. Clementi catches his arm, ties him up. Ref inexplicably stands them up. Big shots from Sarnavskiy score, lands a head kick. Clementi shoots, stuffed. PMN scores the round 10-9 Sarnavskiy.

Round 3 – Sarnavskiy scores with punches early. Clementi lands a nice right but then gets dropped. Clementi rolls for a knee. Hammerfist from Sarnavskiy, he pulls free of the submission attempt, lands a big left. He lays inside the guard of Clementi. Clementi looking for a kimura, lets it go. Sarnavskiy lands several punches to the face. Clementi with rubberguard, looks like he’s looking for a gogo. Lets it go. Sarnavskiy holding him down. Ref stands them up. Clementi shoots, stuffed and put on his back. Sarnavskiy stacks him with a big punch. He lets Clementi up and drops him with a kick. Lets him back up. Spinning backfist from Clementi and falls to his back after getting blocked. Clementi grabs him and puts him on his back. Sarnavskiy locks up a triangle, lands several punches. PMN scores the round 10-9 and the fight 29-28 for Sarnavskiy.