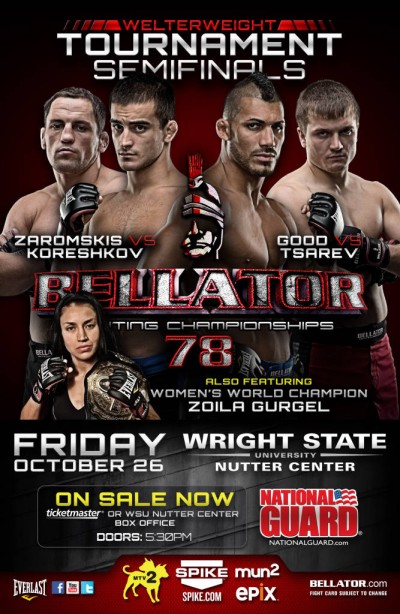 Bellator 78 takes place this evening at The Nutter Center in Dayton, Ohio and features the semifinals of the Bellator Season 7 Welterweight Tournament with Michail Tsarev vs. Lyman Good and Andrey Koreshkov vs. Marius Zaromskis.

Bellator 78 will be broadcast LIVE on starting at 8 p.m. ET/7 p.m. CT on MTV2 and in commercial-free HD on EPIX, as well as in Spanish language on mun2. The preliminary card will begin at 6 p.m. ET/5 p.m. CT and will stream LIVE and FREE on Spike.com.

ProMMAnow.com (www.prommanow.com) will provide LIVE text results and play-by-play commentary throughout the evening.

Round 1 – Clinch, a short right stuns Steele and he goes to one knee. He gets up and they square up. Body jab from Steele. Steele just misses a big uppercut. Rogers catches him with a big right that stuns Steele. Steele counters with a knee that just misses. Nice right counter from Rogers, these boys are throwing heat. He threw a head kick after the right but it was blocked. These guys throw heat like heavyweights. Leg kick from Steele, Rogers gives one back. Steele scores with a leg kick and punch, Rogers counters. Steele shoots, stuffed. One two from Rogers. Right from Rogers, catches Steele coming in. Steele has a chin guys. PMN scores round 1 for Rogers 10-9.

Round 2 – Steele misses a right hook, Rogers counters. Left from Rogers gets through as Steele covers up. Nice one two counter from Rogers as Steele gets the clinch. Elbow on the break from Rogers. Steele’s left eye swollen. Eats a left, lands a right. Crowd chanting “Dom”. Steele with nice head movement. I like his style, a lot of potential. Taking a few too many shots but he’s tough. Big leg kick from Rogers. Flying knee attempt from Steele. Rogers is cut under his right eye it looks like. Leg kick Rogers. Ref warns Rogers for a low blow. Leg kick Steele. Rogers keeps touching the cut under his eye. Superman punch attempt from Rogers misses, clinch. Bell. PMN scores the round 10-9 Rogers.

Round 3 – Leg kick Rogers, inside. Left from Steele, Rogers counters with a one two. Steele catches a leg kick, tries to use it for a takedown but no dice. Rogers with an elbow on the break off the fence. Steele lands a couple lefts but Rogers hurts him with some big counters right on the chin, knocks his mouthpiece out, Steele takes a stutter step. Steele still standing somehow. My God this guy’s chin. Right from Rogers, again. Clinch against the cage, Steele pushes him to the cage. Steele’s nose and lip are a bloody mess. Left from Rogers as Steele tries to get inside. Leg kick Rogers. Steele the one moving forward. Steele pressing, one two, misses. Leg kick Steele. Steele ducks a right from Rogers. Throws a flying knee that misses. Still pressing with 20 seconds. Big elbow and a couple short rights from Steele. Clinched at the bell. Awesome fight. Keep an eye on DOM Steele folks. PMN scores the round 10-9 and the fight 30-27 for Rogers.

Round 1 – Leg kick from Robinson as Straus puts him down. Robinson has a guillotine, readjusts it. It’s loose. Robinson with his back to the cage, gets to his feet, has a standing guillotine, lets it go. Body lock from Straus, standing arm triangle, pulls Robinson to the ground, but he stands right up and Straus gets a standing kimura, they go to the ground, Straus switches to an armbar. Robinson escapes, scramble. Straus on his knees as Robinson rides his back from the side. Straus with a body lock as the stand against the cage. Knee from Robinson. Straus puts him on his back, lands in side control. Nice short elbows from Straus, more. Robinson tries to buck out. Knee to belly from Straus, more elbows to the face of Robinson with 40 seconds to go. Straus looks for mount. Robinson scrambles, goes for a guillotine. With 10 seconds left Straus looks for his own guillotine, it’s tight but time is up. PMN scores the round 10-9 Straus.

Round 2 – Head kick, right from Robinson. Straus gives him a head kick back. Shoots and puts Robinson on his back. On top in half guard. Robinson looks for a kimura from the bottom. Lets it go after eating a couple shots. Straus goes for a guillotine as Robinson sits up. Straus lets it go. Robinson shoots, stuffed. Robinson on his knees. Straus with a standing front headlock, throws a knee, blocked. Gets a body lock and puts Robinson down, lands in side control. Straus starts dropping elbows and hammerfists. Robinson gives up his back, they stand as Straus has a body lock from the back, he picks Robinson up for a big suplex. — by the way Robinson is a BJJ black belt under Royce Gracie. — Robinson gives up his back as Straus looks for the RNC with only one hook in. Lets it go after a few seconds, they roll as Straus keeps looking for the RNC, lets it go. They sit up but Straus is still on his back, locks in the choke, under the chin and the Gracie black belt taps out with only :09 seconds left in the round. Very dominating performance from Daniel Straus.

I just witnessed the worst referee in MMA history — Jerry Poe. He allowed Zaromskis to take 10 punches to the face after he was completely unconscious. These were not small punches, these were huge shots and he just stood there and watched. I was literally screaming at my television. What the holy f*ck is wrong with this guy? He should be IMMEDIATELY SUSPENDED. FINED… IF NOT FIRED. That’s playing with a man’s life right there. Hopefully Zaromskis is okay.

Also, I have no idea why this was ruled a TKO, the guy was completely unconscious.

Round 1 – Good puts Tsarev on his back, now in side control. Knees to the ribs. Tsarev’s back to the cage on the ground. Left hands by Good as Tsarev tries to tie him up. Good postures up with big punches. Tsarev covers up but eats quite a few. Good stacks him, Tsarev scrunched up against the cage. Good continues to punish. Tsarev ties him up. Good in half guard, landing body shots. Tsarev  escapes from against the cage momentarily. But Good puts him right back against the cage and the round ends with Good standing over Tsarev on his back. PMN scores the round 10-9 Good.

Round 2 – Leg kicks from Tsarev. Leg kick from Good inside. Body kick from Tsarev, head kick blocked. Inside leg kick Tsarev. Good pressing, blocks a high kick, gets tagged with a punch. Leg kick Good. Knee from Good, clinch, knee from Tsarev. One two from Tsarev. Double jab from Good rocks Tsarev’s head back. Good with a couple more jabs., again, on the chin. Tsarev with a head kick, blocked. Eats a couple jabs. Leg kick Good. Good ties him up and puts him on his back. Side control by Good. Good with knee on belly, he stands over the downed Tsarev. Ref lets the Russian up. He rushes in with punches. Good tags Tsarev with a left jab, he backs up to the cage and takes a knee from Good followed by more punches. Tsarev goes down and the ref stops it. Now, as this was happening Tsarev was complaining he was poked in the eye from the initial left jab. The ref, Greg Franklin, said he didn’t see it (it was unclear in replay if there was a poke). Tsarev doesn’t speak English.

Good will now face Koreshkov in the Welterweight Tournament Finals.