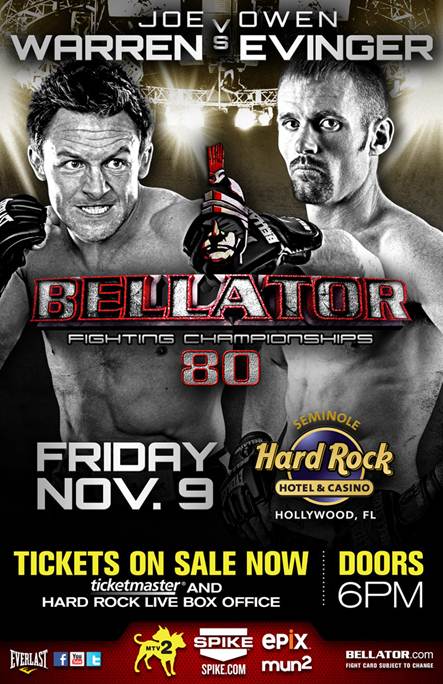 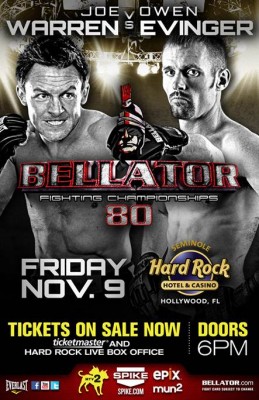 Bellator Fighting Championships have announced that they will return to The Seminole Hard Rock Hotel & Casino for Bellator 80 on Nov. 9. Also, former Bellator Featherweight champ Joe Warren (7-3) and Jessica “Jag” Aguilar (14-4) will both make their return to the Bellator cage at the event.

Bellator 80 will host the Featherweight Tournament Semifinals as well as a feature fight between Joe Warren and Owen Evinger. The event will air LIVE on MTV2 and in commercial free HD on EPIX, as well in Spanish language on mun2. As always, the preliminary card will stream exclusively on Spike.com.

Here is what Bellator Chairman & CEO, Bjorn Rebney, had to say:

“From Michael Chandler vs. Eddie Alvarez in the 2011 Fight of the Year to Pat Curran delivering a devastating Peruvian neck-tie submission, The Seminole Hard Rock Hotel & Casino has been witness to some of our greatest Bellator moments, and I expect nothing but the same November 9th at Bellator 80,”

Joe Warren is currently riding a two fight losing streak, after dropping back-to-back knockout losses against Alexis Vila and Pat Curran at Bellator 51 and 60. Prior to that he had been on a five fight winning streak, defeating notable fighters such as Patricio Freire, Joe Soto and Marcos Galvão during 2010/2011. Warren now has a chance to get back into the win column with a big performance against Evinger.

Jessica Aguilar is currently riding a five fight winning streak, most recently defeating Megumi Fujii via unanimous decision at Bellator 69 in May. Prior to that she scored a unanimous decision victory over Patricia Vidonic at “Fight Time Promotions 8” in February, and defeated Lisa Ellis at Bellator 58 in November 2011. Aguilar will no doubt look to extend her winning streak to six on Nov. 9.