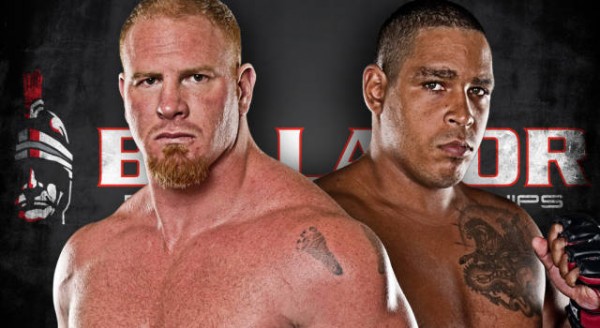 This weekend Bellator kicks off their heavyweight tournament at the Horseshoe Casino in Hammond, Ind. The field is headlined by a grudge match between Eric Prindle and Thiago Santos. With only a few hours until fight time, there is a still a chance the contest will not happen. Also, this week Mann Talk debuts some useless MMA math, because heavyweight MMA calls for ridiculousness.

Eric Prindle vs. Thiago Santos
The most delayed fight in Bellator history will finally happen. First, one of the most gruesome low blows put an early end to their first fight. Then, Prindle got the flu. Finally, Santos failed to make weight for their heavyweight tournament final bout. Prindle was awarded a victory and the opportunity to challenge champion Cole Konrad. Now, as we go to print, the two will finally fight.

Let’s hope for Bellator’s sake that Santos wins this fight. Prindle looked more enthused about congratulating Konrad on a nice win, than he did about actually fighting. The recently retired former champion needed only one minute to pick up only his second submission victory. Heavyweight divisions are absurd to begin with, but if Prindle wins his way through another field, it will be clear that it is by far their worst division.

Santos should be able to get a takedown and work for a submission. Prindle showed virtually no defense of his back against Konrad, and Santos is a lot slicker on the floor. On top of that, Santos is a guy that fought under Vale Tudo rules in an abandon warehouse, so he should be able to survive the type of bar-room style throwing that Prindle loves.

Brett Rogers vs. Alexander Volkov
Rogers has always been a big and athletic guy with a lot of punching power. That is normally more than enough to put you into the top 50 in MMA. He burst through his fights under the Elite XC banner and his first two under the Strikeforce banner. For Strikeforce, he was a good company man and took fights against Fedor Emelianenko and Alistair Overeem. He clearly was not ready, and he dropped both fights. Since then, his career has sort of spiraled out of control.

“Da Grim” looked terrible in a win against Ruben “Warpath” Villareal and losses to Josh Barnett and Eddie Sanchez. According to the press releases, signing with Bellator was supposed to signal a new chapter for Rogers. He looked solid in his promotional debut, which was a losable fight.

Volkov is a lanky heavyweight who will likely struggle with Rogers’ physical game. In 2010, the Russian fell to Pat Bennett who is almost nothing but a wrestler. Look for Rogers to get the clinch and score with knees. It could be a duplicate of Rogers’ win over Abongo Humphrey in his Strikeforce debut.

Richard Hale vs. Mike Wessel
Hale moves up to heavyweight after falling in the light heavyweight finale to champion Christian M’Pumbu in 2011. It is always smart to move into the barren world of heavyweight MMA. He should have a skill an athleticism advantage over almost everyone he takes on in this field including Wessel.

Wessel looked solid against upset machine Ryan Martinez in his last Bellator bout, but he has struggled against the likes of Antoni Hardonk, Dan Christison and Scott Barrett. Normally his strategy is to keep the fight on the feet and strike. His opponent here should be able to get takedowns or win it on the feet. Hale should be able to stay on the outside and land at will.

Vinicius Queiroz vs. Mark Holata
When Vinicius “Spartan” signed with the UFC in the fall of 2010 a lot of Brazilian medai wondered outloud (or at least on Twitter) why the biggest promotion in the world would sign such a fighter. He basically drove the question home in his debut. Quintessential British heavyweight Rob Broughton submitted him with relative ease, and then Queiroz tested positive for a banned substance. Well, in MMA everyone deserves a second chance.

Queiroz’s second run in a major U.S. promotion will be tough sledding. Holata laid an egg in the last Bellator heavyweight tournament, but he is still a solid heavyweight for this level. He has recent wins over Greg Jackson’s product Shawn Jordan and stud wrestler Carmelo Marrero. Look for the Brazilian to struggle for takedowns and then taste some of Holata’s power. Look for a stoppage victory from Holata in this one.

Check out the MMA Outsider Podcast’s Interview with Mark Holata For the rest of the show check out Intermatwrestle.com.