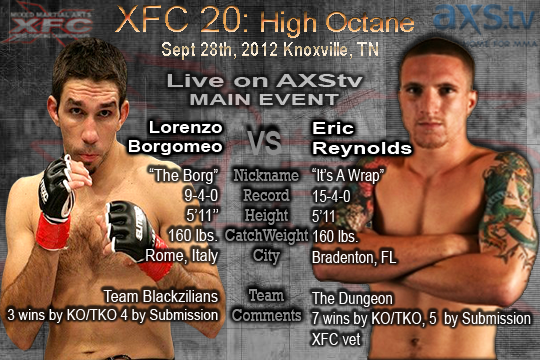 ProMMAnow.com is live and on scene for “XFC 20: High Octane” which takes place at the Knoxville Civic Coliseum. Tonight’s event features one of the XFC’s top lightweights in the main event as Eric Reynolds battles to keep his upcoming title shot intact against Lorenzo Borgomeo.

ProMMAnow.com (www.prommanow.com) will provide LIVE updates from start to finish with results and play-by-play commentary for each bout.

Round 1 – Kick. Jabs to start. Left hand Landwehr. Wright comes back with a kick. Wright closes and clinches. Landwehr fighting off the takedown on the cage. Landwehr turns and puts Wright on the cage. Guillotine attempt by Wright. He pulls out and they are still battling on the cage. Landwehr now looking for a takedown of his own. He works Wright to the mat and goes to work trying to control the body of Wright. Wright works a very high guard looking to control Landwehr and is now looking for a gogoplata. Wright lets it go, but is staying very busy from his back. Wright transitions to the armbar attempt now. He’s chaining submission attempts. Wright lets it go and scrambles to his feet. To the body by Wright in close. Short right hand by Landwehr just before the bell. PMN scores Round 1 for Wright, 10-9.

Round 2 – Wright with a nice jab, right hand. Landwehr comes back with a big right hand that connects. Landwehr closes, elevates, and slams Wright. Short elbows now from Landwehr. Full mount now for Landwehr. Wright gets his hips out and gets to half guard. Landwehr landing short elbows now. Wright is back to his feet now. Big knee from Landwehr. Landwehr dips in for a takedown, and gets caught in a guillotine. He’s out and is changing levels looking for a takedown. Big right hand by both guys. Big kick from Landwehr. Nice exchange in the pocket. Landwehr elevates and slams Wright again. Big second round for Landwehr so far. He lands then forces Wright to roll. He’s looking for the choke now. Alternating between landing big punches and going for the choke. Big punches from the top now. Big shots from Landwehr as the referee looks on. More big punches and the referee steps in and stops the action.

Round 1 – Kennedy closes immediately looking to take the fight to the mat. Lemon shrugs it off, and then delivers some big knees. Kennedy again looking for the takedown. Lemon is swinging wild out there. He connects and cuts Kennedy. They hit the mat and Kennedy goes for an arm right away. Lemon pulls out and delivers some big shots from the top before stepping away and letting Kennedy stand. Lemon connects with a winging shot that drops Kennedy. Again he lets Kennedy up. Finally Kennedy gets what he’s looking for and is on top. He takes the back of Lemon and is looking for the RNC. He’s really high on the back though. Lemon shakes him off and is now on top. Kennedy swings his hips and locks up a tight armbar. Lemon stacks him and delivers some big right hands and pulls his arm free. Lemon takes the back of Kennedy and cinches up a rear naked choke. Kennedy goes two-on-one and rips the arm out from under his chin. Kennedy turns in and is now on top. Nice back-and-forth action in this one. Kennedy to full mount. Right hands from Kennedy. Lemon turtles and is taking shots. Kennedy transitions to his back and sinks in a rear naked choke. The tap comes and it’s over. Exciting fight!

Round 1 – Shah Bobonis is a true character in MMA. Godfrey is an exciting young fighter. This should be a good one. Mini Brock Lesnar Gary Copeland is the referee. Godfrey starts with his jab as expected. Now a kick but Bobonis skates out of range easily. Again Godfrey misses with the right hand. Big reach advantage for Godfrey. Bobonis looking to get inside. He clinches and pulls guard. Back to the feet. Bobonis looks for a hip toss. No go. Nice right hand lands flush for Bobonis. Godfrey kicks, Bobonis catches it and counters over the top. Leg kick Bobonis. Nice counter as Bobonis fires off a three-punch barrage following the right hand. Winging left hook scores for Bobonis. Nice lunging jab from Bobonis. Leg kick Bobonis. Right hand. Jab, Bobonis. Godfrey with a stiff shot to the body. Right hook behind it. Front kick from Godfrey. Bobonis returns fire with kicks of his own. Bobonis gets inside and uses a lateral drop to end up on top. Bobonis postures and lands a big right hand. Under a minute to go. Godfrey looking to score from his back. Elbows from the top now. PMN scores a very close first round for Bobonis.

Round 2 – Bobonis closes quickly and catches the kick of Godfrey. He elevates the leg but Godfrey stays on his feet. Nice exchange in the pocket. Bobonis jab. He’s looking comfortable now. To the body from Bobonis. Sweeping leg kick puts Godfrey on his back. Bobonis now on top. Godfrey working short right hands in from his back. Bobonis backs off and they are back on the feet. Inside leg kick, Bobonis. Godfrey is hesitating way too much in this round. Bobonis punches his way inside and puts Godfrey on the cage. Knees inside by Bobonis. Bobonis looking for a single, but gives it up. He is still controlling Godfrey on the cage. Bobonis dips and eats a knee. Bobonis still pressing. He works Godfrey to the mat again. Bobonis with right hands from the top. Back to the feet. Winging left hand from Bobonis just misses. Bobonis gets inside again looking for another takedown. Back to the clinch on the cage. Godfrey has abandoned his jab and it has cost him. Break. Big punches late, takedown Godfrey. Bobonis locks up a guillotine but runs out of time. PMN scores Round 2 for Bobonis.

Round 3 – Bobonis left hand. Godfrey gets busy and fires off a big one-two combo. Again. He’s way more active already. Bobonis plays to his aggressiveness and gets another trip takedown. Bobonis is really controlling Godfrey on the ground but isn’t doing a whole lot of damage from the top. Short right hands from the top. Body-body-head from Bobonis. Big leaping right hand from Bobonis. Godfrey kicks off, stands, and peppers Bobonis with a big combo. Big right hand connects for Godfrey. He’s letting his hands go. Bobonis with the lateral drop again, but he ends up on the bottom. Bobonis going for a heel hook, but uses it more to sweep then anything else. Back to the feet. Grinding elbow from Godfrey. Bobonis closes and puts Godfrey on his back again. Close final round with under 2 to go. Bobonis looking to advance to full mount. Godfrey retains guard. Godfrey kicks off and stands, then fires off a big right hand. More stinging punches from Godfrey. Bobonis clinches, goes for a takedown but ends up on his back again. Bobonis again grabs a leg and sweeps. Bobonis back to top position. That could be crucial. PMN scores the final round for Godfrey, but the fight overall 29-28 to Bobonis.

Round 1 – Dunn takes the center of the cage. Lots of movement from Sanchez. Both guys look really quick. Neither guy has landed anything yet. Lots of feeling out. Sanchez with a right hand, Dunn counters with a right of his own. Dunn shoots in and gets an easy double leg takedown. Sanchez is nasty off his back. Sanchez locks up a quick triangle. Dunn is fighting it off but is in trouble. Dunn rolls but is still stuck in the submission. The tap comes. It’s over.

Round 1 – No toubh of gloves. Maloy comes out swinging. Sofia lands a big right hand. Chopping leg kicks from Sofia. She misses with a spinning backfist. Maloy comes forward with a stinging three-punch combo. Clinch. Maloy puts Sofia on the cage. Maloy landing inside. Maloy looks for a throw but ends up on her back. Sofia in side control. Maloy working to control the posture of Sofia. Sofia staying tight, but creates enough space to land a flurry of elbows. Sofia grinding with elbows now. Right hands to the body now. Sofia moves to full mount. She postures and pours on the punishment. Maloy scrambles up and out of trouble. Sofia maintains control putting her on the cage. Big right hands from the top. Sofia is doing work. She stands then dives into side mount. Back to the full mount. Big elbows from the top now. Maloy is still moving but is taking a lot of punishment. The referee takes a close look and stops it.

Round 1 – No touch of gloves in this one. Holtzman throws, clinches and looks to impose his will on Coggins. Coggins fights off the takedown attempt and launches some knees up the middle. Holtzman with knees of his own. Coggins breaks and lands an elbow on his way out. Holtzman follows, closes and puts Coggins on his back. Holtzman now on top. Coggins working a high guard. Holtzman goes to the body with a left hand. Coggins kicks off but Holtzman is relentless. He’s back on top. He has Coggins cut just under the eye. Elbows from the top from Holtzman. Coggins has to get off his back. Holtzman passes to side control. Coggins spins and retains guard but Holtzman stands over him and lands a barrage of monster right hands. Coggins kicks off again, but Holtzman keeps the pressure on, throws the legs to the side and goes back to work to the body. Nonstop pressure from Holtzman. Big winging right hands from Holtzman as he stands over and rains down punishment. It’s all over. Brutal ground and pound by Holtzman.

Round 2 – Leg kick Reynolds. Reynolds is really pushing the pace early. Borgomeo back to his kicks again. Reynolds still pressing. Body, knee, Reynolds. Borgomeo is really executing with his kicks. Reynolds connects with a solid right hand. Clinch now. Reynolds pressing Borgomeo on the cage. Borgomeo pushes off and lands another big kick. Reynolds wades through it and connects with a right hand. Back to the clinch. Borgomeo with a brutal knee up the middle. Reynolds is a tough guy for sure. One-two from Reynolds. He follows up with a clipping uppercut. Borgomeo shoots for a takedown. Reynolds fights it off on the cage but eventually gets worked to the mat. Not much from Borgomeo from the top. Reynolds pushes him off and stands up, then resumes stalking Borgomeo. Reynolds gets a takedown of his own, then locks up a tight, tight guillotine. The tap comes quick. Big win for Eric Reynolds.