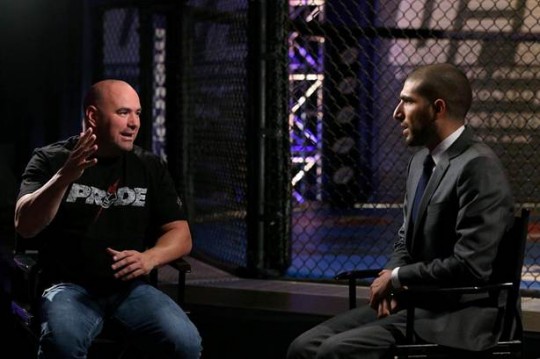 On a “UFC Tonight” special edition Tuesday evening on Fuel TV, reporter Ariel Helwani sat down with UFC President Dana White to talk about the fallout from the UFC 151 cancellation and if he had any regrets about the things he said about Jon Jones and the way it was all handled.

“I had my moment where I was upset,” said White. “One of the things that I like is our consistency. We’ve never cancelled an event. People don’t realize the collateral damage that goes on and how many people who are depending on these events to go on. Not just the fighters and the UFC. So many other people who work for, or are invested in these shows and this this the first time we’ve ever cancelled one, so that’s a little emotional.”

White talked about all the money the UFC spent on advertising and marketing that was lost due to the promotion’s first cancelled event since White and the Fertitta brothers took over in 2001.

“We spent two-million dollars in advertising for 151,” White said. “It’s a business and I have to deal with it. Every day when I wake up, bad things are going to happen and I’ve got to deal with them. I’m proud to say this is the first time we’ve ever had to cancel an event. We’ve always been able to scramble and put it back together good enough to make the fans happy, or sometimes make the fight even better than before. You think we wanted to cancel the first event ever? No way in hell.”

Now that the dust has settled. White also seems to have settled down. He discussed where his relationship with Jon Jones stands currently.

“We haven’t talked since the incident,” he said. “I’ve got no animosity towards Jones. We’ll find out how our relationship is as we move on. This thing is a little weird. It’s never happened before. Jon is a young guy and he’s made mistakes that young people make. Who doesn’t at his age? If I went back to being 23 years old with a ton of fame and a ton of money, that’s when you make all your mistakes. The great thing about making your mistakes in your 20s is by the time you’re established yourself in your late 20s and 30s, you’ve already made all your mistakes and you can conduct yourself the way you should. I give Jon Jones a lot of slack. The guy is young. I’m never going to tell you because Jon Jones didn’t fight in 151 that he’s a terrible fighter. He’s a phenomenal fighter. Anyone who’s watched the UFC long enough and knows my personality, they know how I am. I’ve dealt with the baddest dudes in the world for the last 12 years, and that’s what I like doing. I like fighters. I like how they think. They can be a little hard to deal with, but that’s part of the game.”

Video excerpts from the interview:

In related news, if you still haven’t done so, be sure to listen to everything Jon Jones had to say about the UFC 151 cancellation and how he was treated by the UFC for refusing to take the fight with Chael Sonnen.