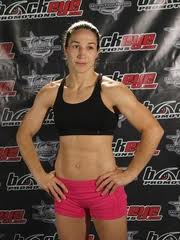 Invicta FC President Shannon Knapp spoke on the reasoning behind the move:

Since we established Invicta FC at the beginning of this year, our goal has been to produce the best possible matchups between women mixed martial artists and, to achieve this, we sometimes need to import talent like Sarah Kaufman from elsewhere as well as to send talent like Sara McMann to a place like Strikeforce where there is a healthy amount of championship level professional women’s MMA competition just like there is on our roster.

Invicta FC has really come on strong as a place for women’s MMA in 2012 and speaks to Knapp’s desire to help build women’s MMA in general. It’s no secret that Strikeforce is the home of the one and only Ronda Rousey who is their women’s bantamweight champion. We wrote that McMann could eventually challenge Rousey for the belt just a couple of weeks ago. McMann spoke on the move to Strikeforce:

“I am saddened not to be fighting in the first Invicta FC bantamweight title fight. I am not sure how long my MMA career will last and, with the time I have left in the sport, I need to take every opportunity that comes my way to fight the best competition out there, so this move is part of a bigger picture for me. Since Invicta FC and Strikeforce work closely together, I hope I will have another opportunity to fight for Invicta FC. Shannon Knapp and Janet Martin (Invicta FC Matchmaker) have treated the other fighters and me better than any other promotion I have ever worked with and I am grateful to them for helping me with this opportunity in Strikeforce.

McMann (6-0) made her MMA debut in May 2011 and has rattled off six consecutive wins, including a hard fought unanimous decision over MMA veteran Shayna Baszler at the Invicta FC 2 event in July. There is no word on who her first Strikeforce opponent will be at the time of the press release.

Invicta FC is preparing to roll out its third live event at Memorial Hall. Headlining the 13-bout professional card will be an atomweight (105 pounds) world championship showdown between superstars Jessica Penne (9-1) of Laguna Hills, Calif. and Naho “Sugi Rock” Sugiyama (8-0) of Kyoto, Japan.