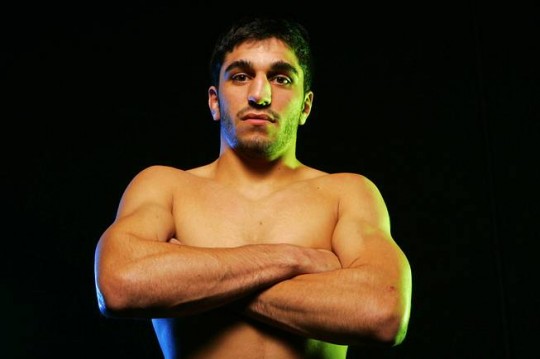 The UFC has announced a new matchup for UFC on Fox 5 as Ramsey Nijem (6-2) takes on Joe Proctor (8-1) in a lightweight showdown. The event is set to take place at the Key Arena in Seattle on Dec. 8.

UFC on Fox 5 is expected to feature a headline bout between current UFC lightweight champ Benson Henderson and challenger Nate Diaz. The event will air LIVE on Fox with the prelims expected to air on FX/Fuel TV.

Ramsey Nijem is currently riding a two fight winning streak, most recently defeating C.J. Keith via first round TKO at “UFC on FX: Maynard vs. Guida” in June. Prior to that he defeated Danny Downes via unanimous decision at UFC 137 in October, and dropped a first round knockout loss to Tony Ferguson in The Ultimate Fighter Finale in June 2011. Nijem will no doubt look to extend his winning streak to three with a big performance against Proctor.

Meanwhile, Joe Proctor last fought at The Ultimate Fighter 15 Finale in June, where he picked up a first round TKO victory over Jeremy Larsen in his UFC debut. Prior to taking part in the TUF reality show, Joe had been successful on the regional MMA circuit in both Connecticut and Massachusetts, defeating notable fighters such as Oz Pariser and Matt Bessette.

Proctor’s only MMA loss was against Luis Felix at “AFO: Thanksgiving Massacre 3” in November 2010, where he suffered a second round TKO. Since that loss he has gone 4-0 and will no doubt look to put another notch in the win column against Nijem.

Stay close to Pro MMA Now (www.prommanow.com) for all the latest UFC on Fox 5 news.

1 thought on “Ramsey Nijem vs. Joe Proctor set for UFC on Fox 5 in December”