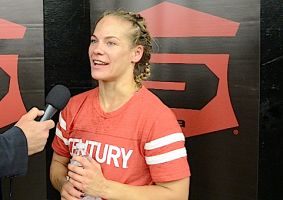 The bout was considered to be “fight of the night” by most and possibly even the women’s “fight of the year”. Kedzie discussed the progression of the bout and talked about her head kick that almost knocked Tate unconscious to end the fight. Kedzie said she popped her shoulder out during the second round, and although she does not want to take anything away from Tate, she felt it did play a role in her performance.