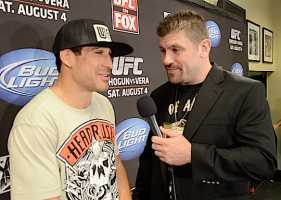 Castillo was there to support his friend and teammate Nam Phan and felt his performance, and ultimately his victory over Cole Miller, was impressive enough to earn “fight of the night”.

We also talked with Danny about the success he’s been having inside the Octagon and his upcoming fight at UFC 151 against TUF 12 finalist Michael Johnson (11-6) which goes down Sept. 1 in Las Vegas.

UFC 151 features UFC light heavyweight champ Jon Jones vs. Dan Henderson in the main event. Castillo’s bout with Johnson will be part of the  main card which will broadcast live on Pay-Per-View.

See more ProMMAnow.com interviews and coverage from UFC on FOX 4.