Bellator 73: Curran vs. Pitbull for featherweight title on August 24th in Mississippi 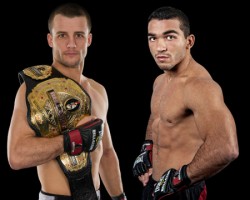 Bellator’s Summer Series will come to close as the world’s top tournament-based MMA promotion features THREE championship fights in one night at Bellator 73: Curran vs. Pitbull on Friday, August 24 from Harrah’s Tunica Hotel and Casino in Tunica Resorts, Mississippi.

Bellator featherweight champion Pat Curran will defend his title for the first time as he is set to take on Patricio “Pitbull” Freire in the main event. Also, Marcos Galvao and Luis Nogeuira will do battle in the Bellator Season Six Bantamweight Tournament Final. Travis Wiuff will do battle with Attila Vegh in the Light Heavyweight Tournament Final.

The event will take place LIVE on MTV2 and in commercial-free HD on EPIX with the preliminary fights being streamed online at Spike.com. The night will begin at 7pm EST/6pm CST on Spike.com, while the televised portion of the card will begin at 8pm EST/7pm CST.

A heavyweight bout between Ryan Martinez and Mike Wessel will round out main card action. This will mark the Bellator debut of Martinez who comes in with a (7-1) career record.

The entire Bellator 73 card is below:

One thought on “Bellator 73: Curran vs. Pitbull for featherweight title on August 24th in Mississippi”