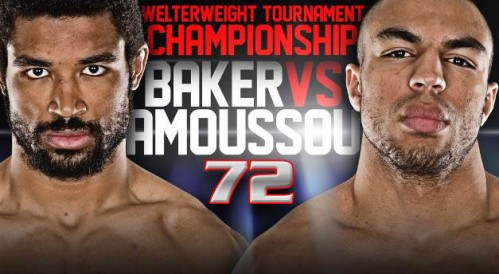 The Bellator Fighting Championships 2012 Summer Series continues. Unlike their normal seasons, their summer offerings are a little less persistent. The last Bellator card was almost a full month ago. This almost makes Mann Talk pine for the days of weekly Friday dates with Jimmy Smith and Sean Wheelock.

Tonight’s Bellator 72, which takes place at the USF Sun Dome, features a welterweight tournament finale, two light heavyweight tournament semifinals as well as some interesting fights featuring UFC and Strikeforce veterans. As always the main card airs live on MTV2 and EPIX, while the undercard can been seen on Spike.com.

Welterweight Tournament Finale
Bryan Baker vs Karl Amoussou
Baker was a big rumbling middleweight, and now he is a bigger more rumbling middleweight. The fact that Amoussou was able to reach the finals of this tournament is one of the biggest shocks in Bellator history. Last year the guy did not even qualify, because he could not best Sam Alvey and his top model girlfriend. Both guys like to work for takedowns. Baker is the bigger and stronger wrestler. On top of that, he might even have the striking advantage. Look for Baker to dominate this fight from bell to bell. However, champion Ben Askren will be even more impressive defeating Baker whenever that fight happens.

Light Heavyweight Tournament Semifinal
Tim Carpenter vs Travis Wiuff
The uncrowned Bellator light heavyweight champion returns to action against a late replacement fighter that won in the first round. Carpenter normally is able to win when he is able to slow the fight down and implement his above-average grappling game. In this fight, Wiuff will easily be the better striker. Do not expect a lot of action, but look for Wiuff to stay on top and take the decision. Even though he is a veteran, Wiuff has been caught in submissions from lesser fighters before such as James Lee and Alex Schoenauer. It is possible that Carpenter gets it done with a submission, but it is more likely that he gets stuck flat on his back.

Light Heavyweight Tournament Semifinal
Emanuel Newton vs Attila Vegh
After a tough stretch back in 2009, Newton has clearly turned things around. He has come about so well that Mann Talk even picked him as the favorite in this tournament earlier this summer. Vegh surprised a lot of people when he was able to stun and submit Zelg Galesic. The Croatian will never be a top MMA fighter, but he is certainly one of the best guys Vegh has ever fought. Newton struggles with strikers that are able to keep him at a distance with a solid jab. Vegh can throw hands, but he is not going to outclass “The Hardcore Kid.” Look for Newton to get the better in the clinch. He will have a wrestling and size advantage, which should lead him to a victory here.

On a side note, can some intrepid MMA fan make a Wikipedia page for Newton already? The guy has fought in the MFC, IFL, Shark Fights and now Bellator. He has no business being a red namer on The Free Encyclopedia.

Ben Saunders vs Brian Warren
Oh Mr. Warren… If you don’t remember Warren, you might want to throw in a DVD of the second Strikeforce event. He was brought in as a can to be recycled by Cung Le, because, well, he had already lost to Le in a kickboxing match two years prior. Warren also holds the dubious distinction of being the last man to lose to Tiki Ghoson.

Saunders should pick up a pretty dominant win here. Warren isn’t on his level in general, but on the ground there is a pretty sizeable divide. The question remains. Where does he go next? He has already failed to win two Bellator tournaments. Does the promotion bring him back for a third try?

Rudy Bears vs Paul Daley
Fans have probably heard of Bears. He headlined a Strikeforce Challengers card and has fought for M-1, Titan FC and Bellator. However, since moving to the bigger shows, he has struggled. He is only 1-4 in his last five fights. His lone win over that stretch came against Phil Baroni victim Nick Nolte (You have no idea how hard it is to not make a 48 Hours reference here). Daley’s lack of skill on the ground makes almost every fight seem interesting from a technical stand point. However, he has never been a guy who gets thrown on his back and submitted by lesser opposition. Bears can wrestle a big, but is he on the level of Yuya Shirai, Jordan Radev or Dustin Hazelett? Probably not, and all three on those men could not get it done against “Semtex.” Look for a left hook to finish this fight after a brief feeling-out process.

Marius Žaromskis vs Waachiim Spiritwolf
Back in 2009, Zaromskis appeared to be a serious threat in the welterweight division. However, he struggled in Strikeforce, and now he appears to be stuck fighting Spiritwolf in perpetuity. Even though both of the first two fights in this trilogy ended in controversy, Zaromskis is the better fighter. This fight will be a fun fight for the fans, or at least the ones that don’t have Direct TV, but Zaromskis should be able to score from the outside and take a one-sided decision. Hopefully that will finish off this series, because Zaromskis deserves a chance to see if he can return to form in a Bellator tournament.