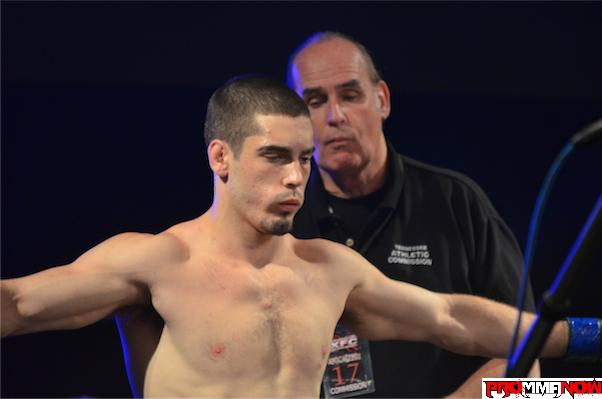 Two Tennesse featherweights will be traveling to Tunica, Miss., for the final show of Bellator Fighting Championships’ Summer Series. Chris Coggins of SSF Academy in Clarksville will face off with Nashville’s Zach Underwood at Bellator 73 on Aug. 24 at Harrah’s Tunica Hotel & Casino.

ProMMAnow.com (www.prommanow.com) confirmed the match-up with Coggins’ coach, Ron Dayley, head trainer at SSF Academy, on Tuesday. The bout will mark the first of a three-fight contract Coggins signed with the promotion.

The bout will actually be a rematch from a 2009 fight in which Coggins took home the unanimous decision win in what was his pro debut and what was Underwood’s second pro bout.

Coggins (6-2) has already fought three times in 2012, scoring first round armbar submission wins over Jay Meneghello at XFC 16 in February and against Austin Lyons at Empire Fights 3 in June. In April Coggins dropped a controversial majority decision to Nick Newell at XFC 17 in Jackson, Tenn.

Coggins spoke to ProMMAnow.com about his Aug. 24 rematch with Underwood:

“I have nothing but respect for Zach Underwood, he is a friend and talented fighter.  It’s time to prove who the best 145 pound pro in Tennessee is.  I’m just happy to be fighting at my true weight of 145, for a group like Bellator and against a quality guy like Zach.”

Underwood (9-4) is a Strikeforce veteran who has won seven of his last 10 bouts. He has fought once so far this year, scoring a first round TKO over Jimmy Van Horn at “Prize Fight Promotions: Mid-South MMA Championships 6” back in May.

In his fight prior to that, Underwood dropped a unanimous decision to Mike Santiago at “NAFC: Mayhem” in May 2011.

Stay close to ProMMAnow.com (www.prommanow.com) as more bouts are announced for Bellator 73  in the coming weeks. And check our Upcoming MMA Events page any time to see what’s on the MMA horizon.