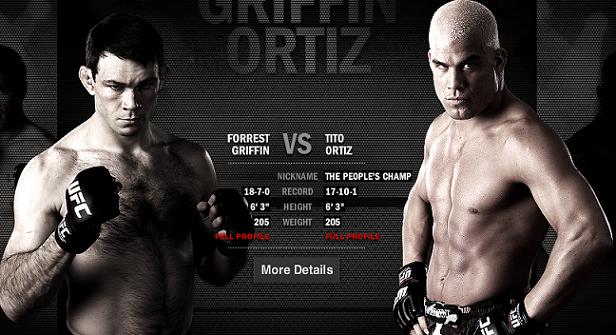 The UFC 148 co-main event will consist of a rubber match between former UFC Light Heavyweight Champs Forrest Griffin and Tito Ortiz. Ortiz was victorious via split decision in their first matchup at UFC 59, and Griffin was victorious via split decision at UFC 106. Ortiz has stated this will be his last fight before riding off into retirement. Can he go out on a positive note? Let’s see how this one breaks down.

Tito Ortiz (16-10-1) is coming into this fight off a TKO loss against Antonio Rogerio Nogueira at UFC 139. That was the first time that Ortiz had lost via TKO in the first round, and the second straight fight he was TKO’ed with strikes to the body. Ortiz has eight wins via TKO/KO and two wins via submission. Ortiz is noted for his wrestling ability and the way he throws short elbows from his opponents guard. He also have an underrated submission game, but tons of injuries and age have robbed him of most of his physical abilities at this point. However, he has given Forrest Griffin tough fights each time they have fought as they match up well stylistically.

Forrest Griffin (18-7) is coming into this fight off a TKO loss against Shogun Rua at UFC 134. Griffin bested Rich Franklin via unanimous decision prior to that fight. Those two fights being the only fights he has had since defeating Ortiz in their second matchup in 2009. Griffin is a workhorse that beats guys with volume striking and cardio. In fact, cardio was the main reason he was able to triumph over a gassed Ortiz in the last fight as Ortiz was basically a walking punching bag the entire third round. However, Griffin lacks knockout power and will give up takedowns which makes Ortiz a tough out for him.

I think those odds are on point. I think Ortiz will put up more of a fight than people expect being that he’ll be high on emotion with this being his final fight. However, if he doesn’t have success early I think Griffin will take this fairly easily like the final round in the last fight.

Ortiz will need to get the takedown early and often. If he’s able to do that he might be able to steal the first two rounds and hold on in the third to take a decision win. However, Ortiz has faded badly in his past few fights and I don’t think he’ll have enough in the tank to take the first two rounds. I do think Ortiz will be looking for submissions if an opportunity presents itself, but Griffin is well versed in jiu-jitsu as well.

I think Griffin will sprawl and brawl this entire fight. That’s all he needs to do to win. He needs to keep the fight standing and pick the slower Ortiz a part from range. He should avoid leg kicks as that’s make him susceptible to a takedown. If he does that, his volume striking and cardio will be enough to take Ortiz out via unanimous decision.

It would be a cool ending to the career of Ortiz to go out with a win, but I’m not sure that chapter’s got enough ink to get completed on Saturday night.