Former Strikeforce light heavyweight champion Renato “Babalu” Sobral (36-9) will make his ONE Fighting Championship debut when he faces Judo black belt Tatsuya Mizuno (11-7) in the “ONE FC: Destiny of Warriors” (ONE FC 4) main event on June 23 at Stadium Negara in Kuala Lumpur, Malaysia.

Sobral was originally slated to fight KO artist Melvin Manhoef at ONE FC 3 in March, but ended up withdrawing from the fight due to a scheduling conflict according to ONE FC reports.

It is interesting to note that Mizuno actually holds a win over Manhoef, having submitted him via first round kimura at DREAM 15 back in July 2010. Mizuno has fought four times sine then, losing two and winning two.

The 31-year-old Japanese judoka dropped a first round submission loss to Gegard Mousasi for the DREAM light heavyweight title at DREAM 16 in September 2010, then suffered a first round knockout loss to Sergei Kharitonov three months later at Dynamite!! 2010.

Mizuno bounced back in his next bout with a first round knockout win over UFC vet Trevor Prangley at “DREAM: Japan GP Final” in July 2011. And in Mizuno’s most recent fight, he scored a second round submission win over Llima Maiava at Pro Elite 3 in January 2012.

The ONE FC 4 bout with Mizuno will mark the 36-year-old Sobral’s first fight since he suffered a first round knockout loss to heavy-handed MMA legend Dan Henderson at “Strikeforce: Henderson vs. Sobral II” in December 2010.

Prior to that, Sobral had won a unanimous decision over Robbie Lawler at “Strikeforce: Los Angeles” in July 2010 and lost his Strikeforce light heavyweight title to Gegard Mousasi at “Strikeforce: Carano vs. Cyborg” in August 2009.

“ONE FC: Destiny of Warriors” will stream LIVE online at www.livesport.tv/onefc starting at 9 a.m. ET on Saturday, June 23. The first four undercard bouts will be free of charge to watch online, while the remaining six main card bouts will cost $9.99.

Co-headlining the “ONE FC: Destiny of Warriors” card is a welterweight match-up between UFC veteran Roger “El Matador” Huerta and Brazil’s Zorobabel Moreira. Moreira is coming off a submission victory over Felipe Enomoto in the ONE FC 3 main event back in March.

ONE Fighting Championship CEO Victor Cui commented on the card:

“I’m so excited for this upcoming event in Malaysia. When I was piecing this fight card together I was blown away by the level of talent we are showcasing on this card. Not only are we featuring the fastest rising fighters in Asia, but we can finally see one of the baddest men on the planet, Babalu Sobral, face off against Tatsuya Mizuno, who is, in my opinion, the best Judo practitioner in that weight class. Come one, come all, to Stadium Negara on June 23, and witness the might of ONE FC and Asian MMA.”

The full “ONE FC: Destiny of Warriors” (ONE FC 4) line-up is as follows: 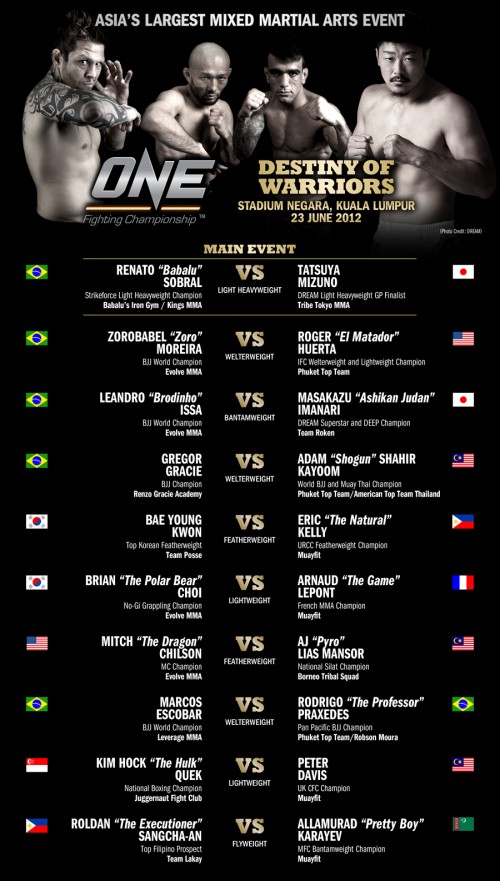