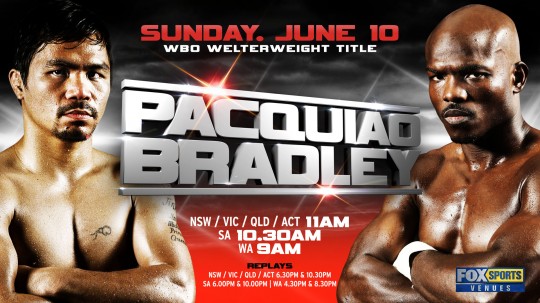 Round 2 – Pacquiao’s corner said, “He’s slow.” Hard left from Pacquiao, again. Clinched and Bradley lands several left hands to the body. This draws boos from the crowd, ref didn’t see him holding Pacquiao. Straight left from Bradley as he drives Pacquiao against the ropes. Another left from Bradley. Left from Pacquaio, he is off balance and Bradley counters with a left before the bell. PMN scores it 10-9 for Pacquiao.

Round 4 – Big right and left to the body, then another left. Clinch up and ref separates them, repeat. Nice shot from Pacquiao. Left to the body from Bradley. Clinched again and ref separates. Again. Lots of hugging this round. Bradley ducking and dodging. Left counter from Bradley. Body shot from Manny. Bradley ducking and dodging again in survival mode after getting tagged hard by Manny. Manny lands several nice shots to the head and body before the bell. Bradley lands one back. PMN scores the round 10-9 for Manny.

Round 8 – Right from Bradley scores. Manny seems to be taking the first minute or two of many of the rounds off. He’s then coming back to take it. Big body shot from Bradley. Pacquiao smiled after an exchange meaning he likely felt it. Left from Manny. A brief flurry by Manny before the bell. PMN scores the round 10-9 Bradley.

Round 11 – Replay show Bradley twisted up his ankle in a earlier round. Even Freddie Roach told Manny he lost the last round. Left jab from Bradley. One two three is blocked by Manny. But Bradley scores with a left and right to the body. Left straight from Manny scores solid. Right from Bradley. Left jab. Left jab from Manny, nice right hook scores. Nice exchange and footwork from both guys. Lots of movement. Body hook from Bradley. PMN scores the round 10-9 for Manny.

And Timothy Bradley remains undefeated and is the new WBO welterweight champion!

The ringside commentators are in complete disbelief. It was a fairly close fight, however, it was pretty clear Manny should have got the decision. It seems, just like mixed martial arts, boxing has their own issues with judging.

I will say I thought Pacquiao looked a bit sluggish and off at times. He started several of the rounds slow and there were only a couple rounds I would consider super definitive for either fighter. Neither guy really got rocked too much, although, Bradley said afterward there were a couple times he felt Pacquiao stunned him.

After telling Bradley they (commentators) had scored it for Pacquiao ringside, he said he will go home to watch the tape and see if he thinks he won or not.

Pacquiao said he absolutely thought he won the fight. They are talking about a possible rematch on November 10th. The crowd does not agree with the decision. Bradley said he’s not satisfied with the decision because he hears the boos and says, “Let’s do it again.”

It’s important to note that CompuBox had Manny landing many more punches and power punches than Bradley.

If you want to know what Floyd Mayweather Jr. thinks about the fight, well you will have to send your mail to the Clark County Detention Center and ask him, because Mayweather is locked up. But this could delay a potential Pacquiao vs. Mayweather bout even further.