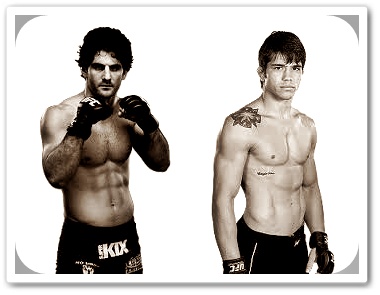 The UFC on FX 3 event will feature a welterweight bout between Erick Silva and Charlie Brenneman that’s set to take place on Friday night and will air on the FX channel. This fight doesn’t have any huge significance since both fighters are trying to work their way up the crowded welterweight division. Let’s see how this one breaks down.

Erick Silva (13-2, 1 NC) is coming off a loss in his most recent bout against Carlo Prater for punches to the back of the head. It was a controversial decision in which Silva had won the fight but then it was overturned to a DQ loss. Silva won his UFC debut in impressive fashion at UFC 134, finishing his opponent in only 40 seconds. He’s (1-1) in the UFC with his only other loss coming all the way back in 2006. He has three TKO/KO wins to his credit and seven wins via submission.

Charlie Brenneman (15-3) is coming off a unanimous decision win against Daniel Branch in his last outing. Brenneman is (4-2) in his UFC career with all four wins coming via unanimous decision. He has one technical submission to his credit and five wins via TKO/KO. Brenneman has a college wrestling background which plays a huge part of his game and the reason why most of his wins are via decision. He often looks to control his opponents on the ground instead of inflicting damage or looking for the submission.

This fight is pretty simple. If Silva can stop the takedowns from Brenneman he will have an excellent chance at winning. If Brenneman is successful with his takedown attempts his chances of winning go up significantly. Silva will have the edge standing, but he’ll have to defend the takedown at all cost. Silva is versed in submissions on the ground, but the fact that Brenneman doesn’t take many chances at all in regards to offense makes it difficult to submit him. Brenneman has fallen victim to guys with power twice and Silva certainly is explosive with his strikes so that will be something to keep an eye on.

This is a tough fight to call, but I think Brenneman grinds out another decision win. If not,  Silva stops him via TKO.