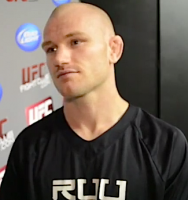 ProMMAnow.com (www.prommanow.com) was on the scene at the TUF Live Finale open workouts on Wednesday in Las Vegas and caught up with UFC welterweight contender Martin Kampmann (19-5) who will headline Friday’s fight card against Jake Ellenberger (27-5).

Kampmann said Ellenberger’s heavy hands were the most dangerous part of his game and feels like he might have to take a few shots from him to get the job done. He definitely thinks Ellenberger wants to keep the fight standing and said it would be a short night for Ellenberger if he tries to take it to the ground.

Kampmann also talked about the current welterweight interim champ Carlos Condit, champion Georges St-Pierre and also named a couple up and coming fighters from Xtreme Couture to keep an eye on.