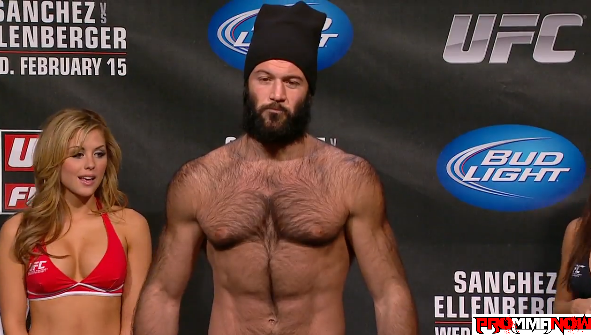 Returning to the UFC Octagon for his third time this weekend will be Dave Herman (21-3 MMA, 1-1 UFC). Herman will face fellow heavyweight and TUF 10 winner Roy “Big Country” Nelson (16-7 MMA, 3-3 UFC) as part of the UFC 146 Pay-Per-View main card taking place at the MGM Grand Garden Arena in Las Vegas.

Herman took the fight on just three weeks notice after Nelson’s original opponent, Gabriel Gonzaga, was forced to withdraw due to injury. Speaking with Pro MMA Now Radio on Thursday, Herman recalled getting the call for the fight, “I got a phone call and they said, ‘Are you in shape?’ And I said, ‘Sure. Of course I’m in shape. I guess you’re asking me that cause I have a fight. So yes, I’m in great shape.’ I wasn’t.”

He’s not lying. He really wasn’t in shape, at least not in fighting shape. He said, “That night I texted my trainer and I was like, ‘Hey, I’m fighting in three weeks, you wanna hit pads tonight?’ The day I got the call was the first day I felt good again after a week-long drinking binge. It literally took me an entire week to feel normal again. It took me like three or four days just to digest food normally again.”

If you haven’t realized this by now, and I don’t know how you couldn’t, but Dave Herman is not your prototypical UFC fighter. In fact, there’s nothing typical about him. He’s like a dichotomy  and a contradiction rolled up into a ball of craziness. He’s like a volleyball playing ninja. He’s like tee-ball on acid.

He could be a genius. Or he could just be crazy. But he might just show up at weigh-ins with his body hair dyed black. He might just change his nickname for every fight. You just never know.

Herman made his UFC debut in June of last year, where he scored a second round TKO win over Jon Olav Einemo and picked up a healthy “Fight of the Night” bonus in the process. Following a short suspension after testing positive for marijuana, Herman returned to action in February where he suffered a tough first round TKO loss to Stefan Struve at UFC on FUEL TV 1.

We asked Herman what he was able to take away from the loss to Struve. “Get back in the weight room. That’s pretty much it,” he said. “I hadn’t been lifting, or running, actually, two things I used to do almost daily when I first got started. … It was a learning experience. It let me know I needed to start doing what I hadn’t been doing. I had been slacking a little, and it was a little bit of a wake up call. There’s nothing like a punch to wake you up.”

A win over Roy Nelson would be the biggest of Herman’s career. There is no doubt about that. Herman himself seems to be a fan. “I love Roy Nelson. He’s awesome, honestly, every time he fights I love to watch him. So, I’m excited about it.”

Nelson gets a lot of flack for his weight, his boss Dana White probably being his biggest critic. Herman doesn’t agree. “I think he should gain weight personally. But that’s just me. The bigger the better. I mean, except when he fights me, hopefully he’s lighter. But for him I think he should be as big as possible.”

Despite the physique, Nelson is no joke. And as a legitimate BJJ black belt he is incredibly dangerous on the ground. Herman’s attitude toward jiu-jitsu has been well documented, it’s true. But I thought maybe since Nelson is known to have such a good ground game, just maybe Herman did something special to prepare for him.

Of course you haven’t Dave, that was a dumb question.

Follow UFC heavyweight Dave Herman on Twitter at @DaveHermanMMA. You can listen to our entire Pro MMA Now Radio interview with Dave Herman below: