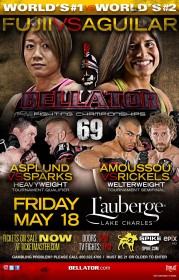 *-Sparks was ill; his fight with Asplund is off. Holata vs. Wagner moved up to the Season 7 heavyweight tournament qualifier.

Press F5 on your keyboard to refresh the page, as play-by-play is updated in real time following each round of action.

This bout replaced Sparks vs. Asplund as the Season 7 heavyweight qualifier after Sparks became ill this morning.

Round 1 – Leg kick Holata. Left hook. He shoots, takedown, inside Wagner’s full guard. High closed guard from Wagner. He attempts to control Holata’s wrists. Holata postures up with punches. High guard of Wagner preventing Holata from getting off too much. Holata ends up snapping on an ankle lock and Wagner verbally submits at 2:24 mark of the first round.

Round 1 – They feel each other out trading a few punches and kicks. Fujii drops Aguilar with a punch but may have been more of a slip as she appears fine. Fujii shoots, sprawl by Aguilar. Clubbing right hand from Aguilar. Jagg catches a kick and dumps Fujii. Gives her a knee to the ribs. Fujii goes for an armbar very quickly transitioning into it. Very slick transition. Aguilar steps over and escapes and gets free. Fujii stands up, front kick and punch. PMN scores the round 10-9 for Fujii.

Round 2 – Fujii has a small cut under her right eye. Fujii feeling out with front kicks that miss. Right hand from Aguilar, lands a couple as Fujii fires back. Fujii stalking. Left counter from Aguilar. Right hook from Fujii. High kick blocked by Jagg. Step in right by Jagg. Left hand from Fujii, moving forward with punches. Left counter from Jagg, being the more accurate striker at this point. Front kick from Fujii. Fijii still moving forward with punches and kicks but not landing so much. High kick from Fujii. Nice left hand from Aguilar snaps Fujii’s head back. Fujii responds by moving forward and turning up the pressure. Front kick scores, but the rest of her attack misses. Aguilar lands a couple more counter punches. PMN scores the round 10-9 Aguilar.

Round 3 – Fujii slips but gets back up. Lands a leg kick. Left hand from Fujii. Leg kick from Aguilar. Fujii shoots and eventually gets Aguilar on her back. Fujii on top in half guard. Hammerfists from the bottom by Jagg. Couple of nice right hands from Fujii as she postures up. Jagg closes her full guard and hanging on. Knees from Fujii to the thigh. They scramble as Jagg tries to escape but Fujii maintains top control and is back inside full guard. Jagg looking for an armbar. Fujii postures up with several punches, moves to half guard. Fujii with some left hands before the bell and Fujii finishes on top. PMN scores the round 10-9 and the fight 29-28 for Megumi Fujii.

Note: Well – my TV went out during round one so I missed a few minutes of the fight. Very well may have scored it for Jagg had I seen the whole round.

Round 1 – Leg kick from Amoussou. Push kick from Rickels lands in the groin and it breaks the cup strap. His corner has asked someone to go to the back to try and find a new one. They are going to try and find another or secure it the best they can. They got the cup replaced, here we go. Front kick from Rickels. Knee from Amoussou followed by an outside trip, lands inside full guard. Can opener from Amoussou. Ear slap from Rickels, he tries to sweep but Amoussou pushes him right back over and is back inside full guard. Ref wants action. Stands them up. Flying knee from Rickels ends up on his back. head kick from Amoussou is blocked but it was a hard shot. Amoussou with a beautiful judo throw, lands in side control. Short right hands from Amoussou from side control. He stands up and dives in with a couple right hands. Back in full guard. Two minutes to go. Rickels pokes him in the eye but Ref didn’t see it. One minute to go. forearm smash and several punches from Amoussou as Rickels still with full guard. Amoussou postures up with several big punches. He goes for a heel hook but time runs out. PMN scores the round 10-9 Amoussou.

Round 3 – Rickels lands a low blow with a kick to the groin and time is called. Big leg kick and a one two from Rickels. Knee to the body from Amoussou. They go to the ground ans Amoussou goes for a leg. Rickels ends up on top inside full guard. Body shots from Rickels, more big shots to the body. Amoussou’s face looks swollen. Nice punch from his back by Amoussou. Rickels staying busy with punches from the top. Ref wants action. More body shots from Rickels. Rickels postures up with punches. Amoussou holds one wrist, punches the chin of Rickels with the other hand. Amoussou with an upkick, he goes for a heel. Rickels stands up, dives in with a big left hand to the face. Amoussou bleeding now under his left eye. Double hammerfist from Rickels, body shots and more hammerfists to the body and head. PMN scores the round 10-9 Rickels and the fight 29-28 Amoussou. Second round could have gone either way. So I could see either fighter getting the nod to be honest. Amoussou’s left eye swollen shut.

Amoussou moves on to fight Bryan Baker in the welterweight tournament finals. He shows great class to Rickels after the fight. Rickels was devastated at the loss.

Round 1 – Spang swings first, misses. Falcao lands a left. Leg kick from Spang. Both guys with their hands high. Knee from Falcao. Spang backs him up to the cage with big punches, stunning Falcao. They clinch up. Knee to the thigh from Falcao leaning on Spang against the cage. Spang with some knees. Falcao with a big knee to the body. Knee from Spang to the thigh. Body shot from Falcao. Body lock from Falcao from behind. Body shot and a knee from Falcao. Body slam from Falcao from behind. Body lock from behind as Spang is on his knees. Blind elbows from Spang. Spang in turtle position, takes a knee, gets to one knee. Gets to his feet. Another takedown by Falcao. Spang gets back up, keeps one hand on the ground. Knee and punches from Falcao. Falcao lands an illegal knee to the head trying to play the one hand on the ground game. One point taken from Falcao. Big leg kick from Spang. Falcao ducks a head kick, clinches up Spang against the cage. Spang locks on a standing guillotine. Falcao rolls with it and back to the feet. Spinning backfist from Spang lands and they swing it out until the bell. This is an awesome fight between two heavy heavy hitters. Great round of action. PMN scores it 9-9 due to the point deduction.

Round 2 – Left hand from Falcao. Falcao with a takedown as Spang goes for a guillotine. Falcao pulls his head out, moves to half guard. Spang gets to his knees as Falcao rides him. Big body shots from Falcao. Blind elbows from Spang. Falcao tries to take his back with hooks, gets one hook in. Falcao pulls the hooks out and continues to punch the side of the head and body. Big body shots from Falcao. Hammerfists to the side of the head and rides Spang as he crawls across the cage. Spang gets to one knee. Knees to the thighs from Falcao, body slam from a back body lock. He continues to ride Spang, knees and body shots, he is just beating Spang down. Spang gets to his feet for about one second before Falcao dumps him with a double leg. Spang to his knees and Falcao is back to riding him. Big round for Falcao 10-9 according to PMN.

Round 3 – Leg kick Falcao. Punch and takedown by Falcao, lands in half guard. Spang gets to his knees. Falcao lands a shot to the temple. Spang covers up. Falcao with a knee to the body and several hard punches and hammerfists to the head. Knee to the tailbone from Falcao. Spang gets to a knee. Falcao moves to the front. Spang goes for the standing guillotine. Falcao rolls out. Spang gets to his knees and Falcao unleashes a barrage of punishment with knees and punches. Falcao drags him down as Spang grabs the cage. Spang tries to crawl away but Falcao stays on him with punches and knees. Spang gets to his feet. Spang locks on a guillotine. Falcao rolls out once again. Spang lands a couple punches on the break. Falcao backs up, lands a body kick. Spang looking for the KO. Falcao catches a kick and puts him on his back. Gets full mount. Spang tries to sweep. Falcao mounts at the bell. Beautiful performance for Falcao. PMN scores the round 10-9 for Falcao and the fight 29-27 for Falcao. — It could be a draw if the judges give Spang round one.