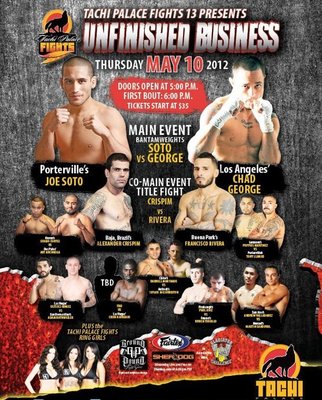 ProMMAnow.com (www.prommanow.com) will provide LIVE results and play-by-play commentary of all the action starting at 8:00 p.m. ET (5:00 p.m. PT).

Round 1 – Feinting of jabs to start. Arciniega comes forward, changes levels and gets a quick takedown. Cortez holding on, looking to stall against the cage. Arciniega with shots to the body. Now left hands over the top. Cortez tries for some wrist control but Arciniega pulls free and scores again. Cortez doing next to nothing off his back. Cortez still hanging on, taking shots to the body. He finally goes for an armbar but it’s not even close. Arciniega pulls free and punishes the body. Now he’s firing off a flurry of left hands. Body-head now with 20 seconds to go. Dominating first round for Arciniega. PMN scores it 10-9 for Arciniega.

Round 2 – Cortez comes forward with some urgency throwing kicks to start the second round. Arciniega shoots again and clinches, putting Cortez on the cage. Knees to the thigh. Cortez fires back with knees. Arciniega looks for the trip, then drops and gets a single. Arciniega back on top, Cortez rolls and gives up his back. Arciniega looking for the RNC now. He locks up the body triangle and sinks in the choke. Cortez goes two-on-one and defends nicely. Arciniega still looking for the choke. Cortez defending well so far. Arciniega isn’t throwing many shots to open it up but he’s still dominating the action. Arciniega fires off a couple of right hands. Cortez turns into Arciniega and ends up on top with less than a minute to go. Short right hands from Cortez. He stands over the guard of Arciniega and kicks the legs. End of round. Another one in the books for Arciniega, 10-9.

Round 3 – Touch of gloves. Uppercut by Cortez. Leg kick. Cortez needs a finish to win this one. Leg kick Cortez. He then counters an Arciniega kick with a right hand over the top. Cortez lands a nice looping right hand. Jab Arciniega. He then shoots but gets stuffed. Arciniega chases him down and puts Cortez on the cage. Break. Arciniega takes the center of the cage, then uses his jab to setup another shot. Stuffed. Cortez has been able to stay on his feet so far. He then shoots for a takedown of his own and gets caught in an Arciniega standing guillotine. It looks pretty tight. There is an arm in and Cortez survives. He readjusts then drops to his back. Cortez still fighting off the choke and he does. Now he’s on top with a little over a minute to go. Elbows from the top by Cortez. Cortez postures and fires off a left hand, then a right elbow that sends Arciniega scrambling. He’s using the cage to try to stand. He leans forward and goes for one final guillotine attempt. No dice. Cortez flurries at the bell. Nice finish but I believe he came up a bit short. Final round goes to Cortez. PMN scores it 29-28 for Arciniega.

Round 1 – Leg kick Llamas. Llamas for some reason shoots for a takedown. Martinez goes for a quick guillotine. It hits the ground and now Martinez is on top. Here comes the scramble Llamas reverses for a moment, and Martinez scrambles back to the top but right into a guillotine. Llamas has it locked up. Wow. It’s over. Llamas avenges is submission loss to Martinez with a submission of his own.

Round 1 – Both guys meet in the middle and exchange right out of the gate. Crispim closes and puts Loveland on the cage. Crispim with a couple of knees in the clinch. Loveland turns and puts Crispim on the cage. They break and Crispim immediately lands a kick and looks for another takedown. Not even close. Loveland fires off a huge uppercut that staggers Crispim. Again. Crispim is standing but is wobbly. Loveland looking for the kill. Uppercut again. Crispim shoots. Stuffed again. Left hand from Loveland. He catches Crispim on the cage and continues to flurry. Crispim looks exhausted. Dirty boxing from Loveland. He sneaks an uppercut through. Nice elbow on the break as he steps away. Front kick by Loveland. Wow, looping right hand, then another uppercut drops Crispim. Loveland lets him up with less than a minute to go. Crispim ducks in for a takedown and swallows a flush knee. KO. Wow.

Round 1 – Soto coming forward to start. George circling. Jab from George as Soto continues to come forward. George flashing his jab then throws and lands a leg kick. Soto shoots and gets an easy takedown. George working the overhook on the left side. Soto pulls free and tries to pass. George using the butterfly guard to prevent the pass. Back to the feet after losing the stream for a second. Soto shoots. Not even close. Soto lands a sharp kick. George with a lead left hand. Soto goes high but George blocks the kick to the head. Soto shoots and gets the takedown, then transitions to the back of George with 45 seconds to go. Soto gets his hooks in as time runs down on the round. End of round. PMN scores round 1 for Soto, 10-9.

Round 2 – Jab Soto. Kick Soto as George looks to land his jab. Soto shoots and gets caught with a kick on his way in. He keeps coming and gets the fight to the mat. George goes for an arm and gives up his back. Soto looking for the RNC again. Soto with a couple of right hands, then switches back to the choke. George defending nicely with wrist control. George stays relaxed, but maybe too relaxed. Soto sneaks in under the chin and the rear naked choke is very tight. The tap comes quickly, and it’s over.