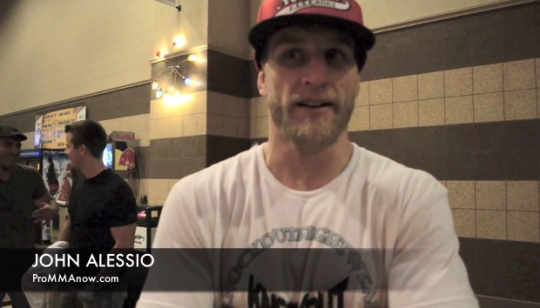 The UFC announced another bout today for UFC 148 with John Alessio taking on Shane Roller in a lightweight matchup.  Both fighters are coming off losses in their last fights and will be looking to get back on the winning side of things. UFC 148 is set to take place on July 7th, at the MGM Grand Garden Arena in Las Vegas, Nevada.

John Alessio (34-15) is coming off a unanimous decision loss to Mark Bocek at UFC 145. Alessio agreed to take the fight on short notice after Bocek’s original opponent had to withdraw from the bout, which was his first fight in the UFC since 2006. Alessio made his UFC debut in 2000 as he took on MMA veteran Pat Miletich at UFC 26 at the age of 20 and has fought all over the world.

Shane Roller (10-6) is coming off a unanimous decision loss to Michael Johnson at the UFC on FOX 2 event earlier this year. Roller has lost three straight bouts and is (2-4) in his last six fights. The former three time All-American wrestler is in dire need of a win here.

4 thoughts on “John Alessio vs. Shane Roller set for UFC 148”