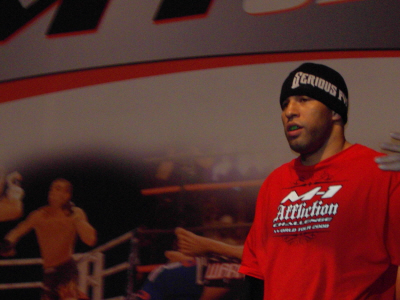 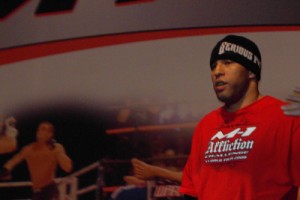 Raphael “Noodle” Davis has competed in Bellator Fighting Championships, M1 Global and a slew of other fighting organizations while amassing a (12-2) record which includes a win over ADCC champion Vinny Magalhaes. Along with taking to battle inside the ring, Davis is also a firefighter with the Los Angeles City Fire Department. Balancing life as a mixed martial artist and a firefighter can be no easy task, both take up tremendous amounts of time while taking courage and both bring high risks of injury.

It was injuries that forced Davis to claim worker’s compensation during Dec. 2, 2008 till May 20, 2011. A time period where “Noodle” continued to train and fight in mixed martial arts bouts, going 6 – 1 and competing on television several times. This lead to the Los Angeles District Attorney’s Office charging him with four counts of insurance fraud and arresting him on April 10th. Davis was held on $30,000 bail and if convicted could face up to five years in prison.

Much like his opponents in the ring and fiery buildings, Davis will fight these charges as he plead not guilty to all counts of insurance fraud when he was arraigned in Los Angeles County Superior Court on May 1st. After pleading not guilty Mr. Davis told the court room:

The media has portrayed me in a light that is in complete contradiction to my personal code of ethics.  I am a professional athlete, family man, law-abiding citizen, and advocate for my community.  These are many reasons I became a firefighter in the first place.  I always strive to achieve greatness in my career, as a father and as a husband.  I look forward to my day in court and being able to prove my innocence.  I believe the facts will speak for themselves at that time.”

Stay tuned to ProMMANow.com for further updates on the story.