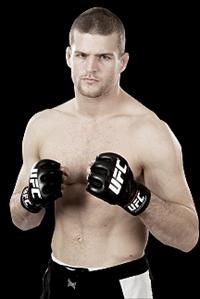 It was after seeing the third season of The Ultimate Fighter on TV while on a trip to the United States in 2006 that Pascal Krauss’ (10-0) relationship with mixed-martial arts began.

Krauss, the son of a wrestler who began boxing at age 14, was no stranger to combat sports, but MMA was something new that piqued the interest of the young German.

“I thought, ‘I should try that when I get back home,’” Krauss said. “My dad used to wrestle and I never really did it before but I had the connections with the sport back home. So I started wrestling and did that for a while. Then I figured that it’s way more entertaining to have all the different kind of combat sports than just being in a boxing gym six days a week throwing jabs, crosses, and hooks. I’m pretty glad that I made it to MMA because it’s way more entertaining and fun to train all of the different areas.”

After training Brazilian Jiu-Jitsu for nearly a year Krauss took his first professional fight in January of 2008, and won via first round submission. Since then, Krauss has won all nine of his subsequent bouts and currently remains undefeated with a spotless 10-0 professional record.

In 2010 Krauss made his UFC debut at UFC 122 where he not only defeated Mark Scanlon via unanimous decision, but also got to celebrate the biggest win of his career to date in front of his fellow countrymen.

“It was pretty cool,” Krauss said. “It was a good experience to fight in front of the hometown crowd and having all of the fans on your side, but it was also more pressure than fighting somewhere else. It still worked out pretty good and it got ‘Fight of the Night’ so I was pretty happy with that.”

But challenging times were ahead for the German. Shortly after making his successful UFC debut Krauss suffered a shoulder injury that kept him sidelined for all of 2011.

“That was probably the worst year of my life so far,” Krauss said. “Coming from flying so high, getting the win, getting the ‘Fight of the Night’ bonus and having big plans for the future, then all of the sudden you’re out of the sport. You can’t move at all and you’re just laying in bed being in pain. It was really, really painful. You find out a lot about yourself when you’re in a dark period of your life and you don’t feel that good, but I made it. I’m feeling pretty good right now. My shoulder is back 100 percent and I’m ready to scrap.”

This Saturday, May 5, Pascal Krauss makes his return to the Octagon when he takes on John Hathaway (15-1) at UFC on FOX 3.

“I think it’s going to be an entertaining match because I think we’re pretty even in most areas,” Krauss said. “We’re both pretty well rounded and the fight could go anywhere.”

And despite his nearly year-and-a-half long layoff Krauss said that he isn’t too worried about being rusty once he steps back into the cage.

“We’re in a pretty similar situation because Hathaway has been out for a year too,” Krauss said. “So it shouldn’t be that big of an advantage for him or for me. I’m sure I did the right thing with my training and I hope that it brought me back into the fighting mode.”

Before his bout at UFC 122, Krauss came to America to focus on his training and improve his skills as a mixed-martial artist. For his upcoming fight with Hathaway, Krauss has enlisted the help of Duke Roufus and his team at Roufusport in Milwaukee, Wis.

“It’s great out here having all of these different guys to work with,” Krauss said. “We have really good sparring partners to work with and I’m pretty sure I’ve improved in every aspect of the game. I don’t want to talk that much about it yet, but I hope I can show you some of my improvements on May 5.”

But MMA fans don’t have to wait until Saturday to get a preview of what might happen, because Krauss was recently released as a downloadable character in the UFC Undisputed 3 video game.

“It’s a big honor and it’s like a dream,” Krauss said. “Every boy probably has a dream of being in a video game one day and I can check that off my list now. That’s really cool.”

Krauss said that he has played his character in the game, and his opponent should come as no surprise.