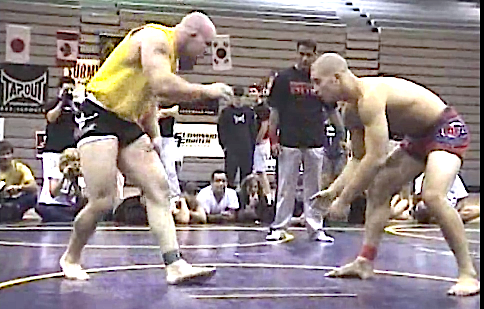 Take a step back in martial arts history in this rare previously lost footage as BJJ guru Marc Laimon and former UFC heavyweight contender Jeff “The Snowman” Monson compete in this classic match-up at Grapplers Quest West 1 on Saturday, Oct. 7, 2000 in Las Vegas.

At the time, Laimon was listed as part of Team Lewis-Pederneiras and weighed 209 pounds. He was the Abu Dhabi Hook N’ Shoot Trials Champion and  Absolute Division Invitee.

An almost completely tattoo-less Monson was listed as part of AMC Pankration and weighed 225 pounds. He was  a 1999 Abu Dhabi Champion, Advanced Superweight Co-Champion and Absolute Division Invitee.

Of course both of these men went on to become two of the most respected and highly successful individuals in the grappling world. Laimon was invited by the UFC to serve as a grappling coach on several of the early seasons of The Ultimate Fighter, he also founded Cobra Kai Jiu Jitsu and has coached some of the biggest names in MMA.

In addition to winning countless grappling titles and championships, including Abu Dhabi, Monson relied on his decorated grappling game to build a heavyweight MMA record of 44-13, with 27 of his wins coming by way of submission. Today, at 41-years-old, Monson remains competitive in the heavyweight division, fighting multiple times per year.