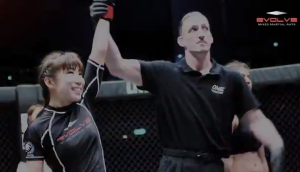 Evolve Fight Team has released a very cool video blog capturing their victories at “ONE Fighting Championship: War of the Lions” that took place on March 31st. In case you don’t know, Team Evolve went 4-1 with victories by Eddie “The Magician” Ng, Nicole Chua, Zorobabel Moreira and Fabricio Monteiro.

The only member who came up short that night was Yodsanan Sityodtong who faced that crazy old Chinese dude Jiang Long Yun. However, even though he lost, Yodsanan reminded everyone how much of a complete badass he is by not tapping while being in a rear naked choke and simply passing out. I know I would have tapped if Jiang Long Yun was choking me out. Hell, I probably wouldn’t have gone into the cage to begin with.

In this video blog, you’ll get to see a behind the scenes look before the fights, relive some of the coolest moments of ONE FC 3 and you’ll see Chatri Sityodtong get amped and shout at Fabricio Monteiro that “This is your house!”

Wesley De Souza has always been one of those guys who's always loved fighting. A former pro wrestling fan, Wesley began his love with Mixed Martial Arts only 4 years ago and has never looked back since. He's also a self professed fitness addict and an avid practitioner in Muay Thai and Brazilian Jiu Jitsu as well. If he's not busy with his day job as a logistics executive, he's busy writing articles for www.thefightnation.com, a website focused on MMA in Asia. Oh yeah, and he's got an obsession with Arianny Celeste. He thinks she's uber hot.