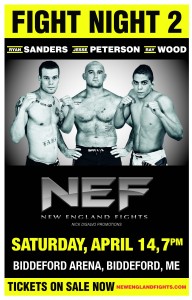 Biddeford, ME (April 4, 2012) — New England Fights! (NEF) is proud to announce that fan favorite John “First Class” Raio (1-0) will return to the ring at Fight Night 2.
“John Raio became an instant star when he made his debut at Fight Night 1 and we couldn’t be happier to be bringing him back when we storm Biddeford on April 14th,” stated NEF co-owner and promoter Nick DiSalvo.
A lifelong wrestler, John Raio from Gardiner, Maine, won a state championship at 125-pounds in 1995. Raio went on to wrestle in college for Plymouth State University and the University of Southern Maine. “Raio knows wrestling,” stated NEF co-owner and matchmaker Matt Peterson. “He’s been grappling and cutting weight his entire life, so he’s a seasoned athlete that understands the discipline and sacrifice that’s required to become the best. So far, he has done a great job of importing that work ethic into his mixed martial arts training.”
Despite completing a successful high school and college wrestling career, Raio continued to feel the competitive itch. When the state of Maine finally legalized and regulated mixed martial arts, Raio, who now resides in Topsham, Maine, heard the calling he had been craving. “I first started training in MMA just to get back into shape,” stated Raio.  “There was a point in time between college and training MMA that I, as a Christian, thought it was too violent to watch and compete in.  After training for a while, I realized that each component of MMA was a sport in itself–wrestling, jiu-jitsu, muay thai, karate, judo, boxing, etcetera–some of which are Olympic competitions.  There is definitely a risk of injury, but with skill and continued training, you can minimize the risks.  I’ve always been a competitive person. After entering some BJJ events and doing well recently, I decided to test my skills in MMA. I’ve always loved competition and to me this is the ultimate competition.”
Raio made a successful debut at Fight Night 1 in Lewiston in front of hundreds of his loyal family, friends and fans in a hard-fought three-round decision over Team Real Deal’s Ken Kersch. At Fight Night 2, Raio will face CMBJJ newcomer Erik Nelson, a 19-year old Brazilian Jiu-Jitsu blue belt that is a stark physical and stylistic contrast to the 35-year old wrestler Raio. “I have a lot of respect for my opponent and his abilities,” stated Raio. “Erik is very experienced in BJJ, while I have the wrestling background. This fight will definitely end up on the ground.”
A mailman by trade, Raio has been dubbed with the moniker “First Class”, a nickname that perfectly fits the dedicated husband and father of two. “First Class is all class,” stated Peterson. “When you meet John you quickly realize that he is competing in MMA for all the right reasons. He has all the tools to be a future ambassador of the sport, if he decides to stick with it.”
At 35, Raio, who trains under Ryan Cowette at MMAAthletix in Brunswick, Maine, realizes that he’s entering the sport late and his time to make an impact is limited. As a result, it’s uncertain how many more fights he will have before he hangs it up. “I love MMA and certainly plan to fight as long as my body allows me to,” stated Raio. “At 35 years old, I am in the best shape of my life.  However, I am taking it one fight at a time, and am focusing on putting on a good show for the MMA fans in Maine.”
“Fans of quality fighters and quality people should capitalize on the opportunity to see John Raio compete now while he’s still active,” stated DiSalvo. “He represents the best of what MMA is about—so make sure to come out to Biddeford to see John and the rest of our quality roster in action on Saturday, April 14th!”
For more information and to purchase tickets please visit www.newenglandfights.com.